How long should the natural, born hunting Dachshund sleep? You’ll be surprised to learn what it takes for the Doxie to preserve energy so she can seek out her next “invisible” prey.

How long do dachshunds sleep at night? An adult Dachshund will sleep as much as 16 hours in a given day compared to roughly 14 hours for other dog breeds. A Doxie puppy can enjoy their slumber for nearly 20 hours (completely normal), and a senior pup will need anywhere from between 12 and 18 hours each day.

Why do dachshunds like to sleep under the covers? Dachshunds instinctually dig and would ultimately burrow a hole into the dirt big enough to protect and sleep comfortably if necessary. But as home dogs now, instead of hunters in the wild, they attempt to make their favorite dachshund bed a bit warmer by scraping their paws, creating friction, and warming the space to keep cold from her skin or burrowing under the blankets.

How Much Do Dachshunds Sleep?

A full-grown Dachshund roughly sleeps between 14 and 16 hours a day. The dog’s ancestors were badger hunters meaning these pups require more rest than another breed, and they genuinely enjoy the slumber. That’s especially true in a soft, comfortable bed under some cozy blankets.

Do dachshunds sleep a lot?

As a rule, the Doxie is an energetic, active dog. The animal needs plenty of exercise, at least 30-60 minutes each day. Usually, as a pet parent works around the house doing chores, the dog will follow along behind like a little “helper.”

The minute the activity stops, the Dachshund is content to find a lap, blankets, or her bed to snuggle up and take a nap. That usually lasts until there’s a need for a potty break or a meal or snack. But when it’s time to settle in for bedtime, if you don’t give the dog water after a certain point in the evening, sleep will last until throughout the night. Otherwise, there will be a potty break somewhere in the middle of the night. At least that’s how my little pups work.

How Much Sleep Does An Adult Dachshund Need Compared To A Puppy?

In order for a Dachshund to retain its friendly, fun temperament and alert, watchdog tendency, they need to have at least between 12 and 14 hours of sleep. That will vary depending on age. Changes in the animal’s sleep patterns can be relevant to potential health problems, and some relate to the pup’s lifestyle.

The dog has an inherent need to preserve her energy to perform adequately as a hunter. Once the Doxie sees there’s nothing meaningful occurring, such as a meal, playing, taking a walk, it signals to them it’s time to rest.

That isn’t a sign the animal is lazy; there’s just nothing interesting happening.

How Much Sleep Do Dachshund Puppies Need?

Dachshund puppies like cuddling and snuggling. If you have two dogs, they will likely cozy in together to sleep for comfort. When you bring a new pup home, she will probably need you to nuzzle with her for the first few nights so she can acclimate to her new environment.

The puppy will need more rest than the adult to develop and grow into an adjusted, happy full-grown dog. The pup will typically sleep roughly 20 hours a day and the remainder of her time in training and play.

How Much Sleep Do Senior Dachshunds Need?

As the senior dog’s activity level begins to slow down, she wants to sleep more. This Doxie will want to snooze for as much as 18 hours. The animal will have less stamina and should receive rest following any sort of exertion, whether it be mental or physical.

When you adopt a Dachshund at any age, it’s essential to attempt to get the dog on a sleep schedule so that she doesn’t wake throughout the night. That means making attempts to keep her active during the day (according to age and ability). The animal can then be ready for peaceful rest at the end of the day.

Why Do Dachshunds Sleep so much?

A Dachshund is standardly a very energetic pup and exceptionally playful, but each dog will offer her own temperament and develop unique tendencies. One thing to notice is this breed enjoys sleeping in between the activity, so much so that pet parents become concerned that it might be too much.

It is, however, an instinctive characteristic for the Doxie, who was originally bred to be a hunter, a laborious position for which she was required to participate in intensive digging, burrowing, and running for extensive periods. These pups still today will follow their parents in a “helper” manner, using all senses to protect, guard, and watch over every situation until it’s time to rest.

When activity stops, the animal needs to restore the energy generally with numerous naps. These are quite simply part of their nature. Some other reasons you’ll find for their continuous snoozing include:

When the Doxie is comfortable and familiar at home, she will rest more readily than if there is a change in the environment. Any sort of stimuli like a visitor, traveling to someone’s home, being left alone, or any activity in the house will keep the pup alert and awake. A quiet, peaceful atmosphere is the perfect scenario for sleep.

As the Dachshund ages, stamina begins to wane, and the pup will start to slow down, needing much more rest. It’s best not to attempt to exercise an older dog in the same capacity as you would a young, healthy pup. The animal can’t withstand the same level of exertion.

There could most likely be added weight, slower metabolism, potentially joint issues. The Doxie needs adequate time to recover from any mental or physical stimulation. The senior dachshunds will sleep much more than the full-grown, as will a puppy.

With a puppy, there’s plenty of changes happening in growth and development, requiring a great deal of sleep. These Doxies will also wear themselves out with exciting moments of excessive play and activity while exploring their surroundings.

Even if you exercise the dog 30-60 minutes each day or possibly more, the Doxie can often become bored. In those moments, their choice is to sleep. That can be fortunate for pet parents because some breeds opt to become destructive when they’re bored. If the worst a dog does is sleep when they’re bored, that can be good – right?

What To Do If  Your Dachshund is Sleeping Too Much

For pet parents who notice dramatic changes in sleep patterns where the animal might sleep too much, first ensure you’re giving the animal adequate exercise of at least 30 to 60 minutes each day (or according to the animal’s abilities, particularly a senior dog).

A Dachshund not engaged or stimulated physically or mentally will naturally sleep. But, if the Doxie isn’t interested in an activity, preferring instead to sleep, it’s essential to seek guidance from a reputable vet. The professional can assess for illness, possibly depression, or the potential for subpar food quality, keeping the energy level low.

Back problems will prevent the dog from lying on her back, typically a favorite sleep position for the animal or curling in a snuggle. Not feeling well will cause your Dachshund to want to rest more than usual. Plus, Dachshunds are prone to narcolepsy, a disorder that makes staying awake a challenge. Other ailments leading to the desire to sleep more often:

Under the right circumstances and with proper habits developed, a healthy Dachshund will generally sleep all night comfortably, even after having a power nap or so during the day.

It’s not unusual for a healthy, happy full-grown Dachshund to sleep as much as 16 hours in any one day. For pet parents who want to keep Doxies on a more “awake” schedule during the day, so there’s a more extensive period of slumber at night, the pup needs engaging, stimulating activity during the daytime hours.

Plenty of exercise (but no more than 60 minutes), plus keeping busy with chores will entice the dog to follow you from room to room acting as ‘helper.’ When a pet parent is moving around the house, the dog will be less inclined to settle in for a rest. It’s also wise to take up the water at a reasonable hour, so there’s no need for a middle-of-the-night potty break.

If the Doxie is not engaging in activities preferring instead to stay in her bed under the blankets day-in and day-out, a visit to the vet would be a wise step.

There could be an underlying health issue. Maybe the food is not sufficient in elevating her energy. There could be some depression; any number of things could be creating sluggishness. A reputable vet will assess and make recommendations.

Otherwise, your Dachshund is doing as nature intended, preserving her energy to sniff out prey as she follows you on the next day’s adventure. 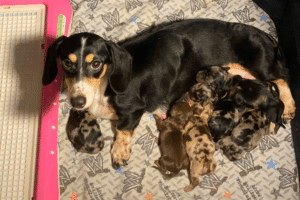