Thousands of years of domestication produced a variety of dog breeds as far as their appearance and nature are concerned. However, a dog’s behavior still has much in common with its original ancestor the wolf which is a predatory animal.

Like the wolf, dogs are naturally packed animals, with strong hunting abilities. This means the dog only feels comfortable in a community.

The dog’s community can be in the company of other dogs or with humans because humans exhibit some same characteristics that dogs can understand. That is, humans have natural leadership abilities, provides food and shelter for the rest of the pack, and will protect the pack. This doesn’t mean that humans are on the same level as dogs, but that dogs can understand and appreciate the level of humans and accepts the family as their pack. 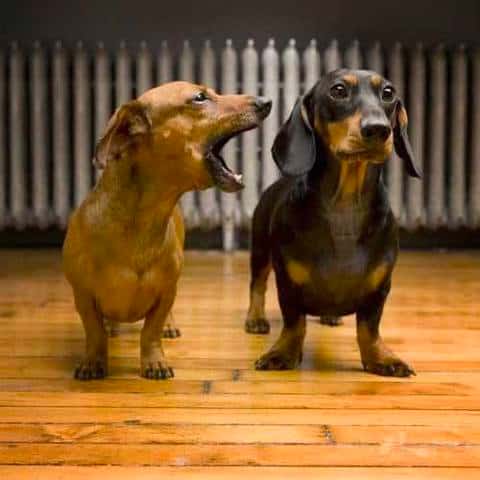 Dachshunds are no different than other dogs as they relate to the pack structure. Unlike some dog breeds, the dachshund is always trying to improve its standing in the pack order. Given the chance, the dachshund will put itself at the top of the pack if the owner doesn’t show that they are clearly the pack leader. Keep this in mind as your dachshund tries to take your seat, grab your food if given the opportunity, or takes over your bed.

How dachshunds talk with each other

Dogs use two types of language to communicate with their pack buddies: articulate language utterances and body language.

Unless you’re very observant of your dog, you’ll probably miss much of their natural efforts at communication. These communication efforts include:

In general male dogs are the usual ones to communicate with this method, but some females will also use it. Marking is when the dog urinates on a particular spot (usually something elevated to a certain degree, compared to regular urination on a flat surface). This is an attempt to mask the scent of another dog and as a warning to other dogs that this territory is taken, move on. When a dog becomes agitated or fearful of something they don’t understand, they will mark their territory as a precaution.

Humans use their eyes and ears to orient themselves to our environment. Dogs get their information from scents. The dog’s olfactory capabilities are vastly superior to humans.

When 2 dogs meet for the first time, they begin by approaching each other with muzzles thrust forward until their noses almost touch. They sniff each other at length. During this initial contact, they determine if the smell is good or bad and whether their relationship will be friendly or not.

Ever notice that your dog always seems to find the smelliest stuff in the yard to roll in? The reason they do this is not to aggravate you but to mask their own scent. Remember dogs are natural hunters and they want to hide their own natural smell from potential prey. Take a look-see sometime at any hunting catalog at all the scents that human hunters can buy to mask their own scent. Its same thing for the dog, except they don’t have any mail-order catalogs, just the rankest stuff they can find in the backyard.

While we can’t be absolutely certain on this one, it is generally accepted that in prehistoric times, dogs would create caches of food to see them through the lean times. This is probably a carryover from that even though their chew toy they just buried isn’t really food, but it’s the same principle: they’re saving something of theirs for future use where no one else can get to it.

Dogs have a variety of vocalized communications they use to get their point across either to other dogs or humans.