While mixed breeds can be unpredictable, it’s likely that a French Bulldog Dachshund mix will be friendly and playful like the parent breeds. So, this mix is a great family dog that’s also suitable for apartment living. 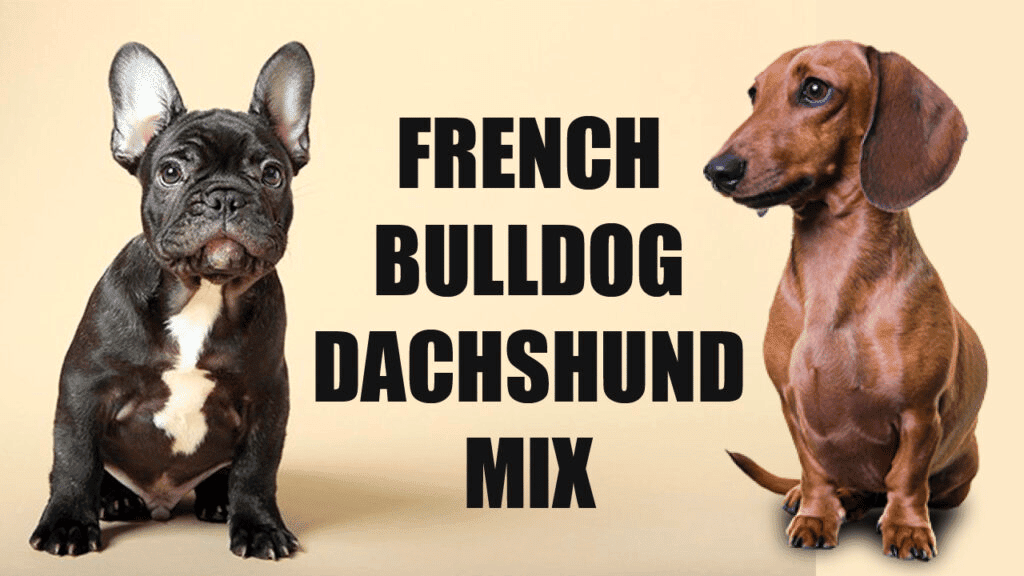 There’s a lot to learn about this unique mixed breed, so let’s look at all its qualities first. Here are the common traits for a French Bulldog Dachshund mix compared to Dachshunds and Frenchies.

The origin of this mixed breed is unknown. It’s likely that the hybrid has been created by accident for many years, but it’s unclear when breeders started purposely pairing the two small dogs. Yet, we can learn a little more about the mix by looking at the history of the parents.

Dachshunds came from Germany, where they were known as “Badger Dogs.” They can be traced back to the 15th century, but they’ve likely been around even longer than that. Their short legs and long bodies allowed them to hunt prey in dens, such as badgers and foxes. Over time, they became more popular as companion dogs, but they still have some of those hunting instincts.

French Bulldogs were bred in France during the Industrial Revolution. For a while, they were called “Toy Bulldogs,” and they’ve always been bred as companion dogs. Unfortunately, the breed has developed many unhealthy traits over time to fit the trends. Their noses are now much shorter, making them prone to breathing problems.

French Bulldogs and Dachshunds tend to have some similarities in their personalities. So, this makes it a little easier to guess what their mixed breed’s temperament will be. Here are some things you can expect.

French Bulldog Dachshund mixes are cheerful, smart, and friendly. They quickly grow attached to their family members, and they love to cuddle and play. Thus, with proper training, they make excellent family dogs.

These mixed breeds have medium energy levels, but this can greatly vary from dog to dog. Doxies are playful, energetic, and love to explore, so it’s possible that a French Bulldog Dachshund mix would be too. While Frenchies are also playful, they tend to be a bit lazier and laidback at times. So, you can expect a mix of the two to be playful and energetic as a puppy, but they might become more laid back as they age.

French Bulldog Dachshund mixes are always excited to meet new people and animals. Yet, they might have an instinct to chase small animals and children, so that’s a behavior you’ll need to work on. Yet, if it’s a concern for you, then don’t buy these dogs if you have a household with young children and small pets.

French Bulldog Dachshund mixes can have any of the coat colors that their parents can have. Both Dachshunds and French Bulldogs are known for having a wide range of colors, so the results for this mix can be all over the place.

The most common coat colors are brown, white, red, and black. Some will be solid colors while others could be a combination of more than one color.

For the most part, French Bulldog Dachshunds mixes will have smooth, straight hair with a normal density. If the Dachshund parent has long or wiry fur, then it’s possible for the puppies to have thicker, more wiry fur too.

Doxies and French Bulldogs are both small to medium-sized dogs, so their puppies will be the same way. French Bulldog Dachshund mixes are usually 15 to 17 pounds and 8 to 12 inches tall.

Luckily, both French Bulldogs and Dachshunds don’t require professional grooming. Yet, they still have the same basic grooming needs as every other dog, so let’s take a look at what those are.

These dogs are moderate shedders, so you might need to brush them a few times a week to get their shedding under control. Since they have fur that doesn’t keep growing, you’ll never have to worry about taking them to the groomer for a trim.

Baths are another great way to control shedding. After you give your dog a bath, brush them to effectively get all the loose hair out. French Bulldog Dachshund mixes need baths about once a month, but most families just bathe them when they’re stinky. They might inherit the wrinkles of Frenchies, so be sure to clean, rinse, and dry their skin crevices effectively.

All dogs have a few other grooming needs that people often forget. An important one is nail trimming. Dogs should get their nails trimmed at least once a month. If you neglect it for too long, their nails could become overgrown and require weekly trimmings to get them back to a healthy length.

You can trim your dog’s nails at home using a clipper or a grinder, but if you don’t feel comfortable doing that, it’s okay. You can go to a groomer or vet to get them trimmed instead.

Teeth brushing is also important for dogs like it is for humans. Dogs should get their teeth brushed at least once a week, but more often than that is ideal. Dental diseases are one of the most common health concerns for dogs, so it’s important to brush their teeth often to prevent plaque from the building. If you aren’t brushing their teeth well enough, your vet may recommend professional teeth cleaning or extracting in extreme cases.

French Bulldog Dachshund mixes have medium energy levels and likely won’t need more than 30 minutes of exercise a day. One or two walks daily is usually perfect for these small dogs.

However, they might inherit hunting instincts from their Dachshund parent, which means they’ll love to explore. So, consider taking them to parks and other public spaces for a change of pace now and then. Walking in the same neighborhood every day could become boring for them.

Most of these mixed breeds love playing fetch too, so having some playtime in the backyard is another way to satisfy their exercise needs.

Training is crucial for any dog, and French Bulldog Dachshund mixes are usually pretty good at learning. Like all dogs, you should focus on positive reinforcements when training. Praise them and give them treats when they do something right, but don’t yell or scare them if something goes wrong. Punishing your dog will only teach them to fear you while praising them will help you form a closer bond.

French Bulldog Dachshund mixes can have a stubborn side, so patience and consistency are key when training them. Make sure everyone in your household is on the same page in terms of rules and expectations for your dog. That way, it’ll be easier for them to learn and understand what they’re allowed to do.

You’ll need to feed your French Bulldog Dachshund mix about a cup of food per day. That amount may vary based on your dog’s size, age, and activity level. If they have trouble chewing their food, consider choosing a small breed formula since it’ll have small kibble pieces.

When choosing the perfect food for any dog, look closely at the ingredient list. It should be high in real animal protein without having any cheap filler ingredients. If your dog has a sensitive stomach or lots of allergies, you can find limited ingredient formulas that don’t contain the common dog allergens.

Unfortunately, both Dachshunds and French Bulldogs have lots of common health concerns. While their puppies won’t be at risk of all of them, it’s a good idea to be aware of the possibilities just in case.

If your French Bulldog Dachshund mix has a flat face like a Frenchie, they’ll be prone to breathing problems. Extreme cases might require surgery, but for the most part, all you can do is limit their activity during warm weather. A responsible breeder should breed French Bulldogs with longer snouts to avoid this.

Another French Bulldog health concern that puppies could get is skin infections. Bulldogs have a lot of wrinkles and skin folds, which makes it easier for dirt and debris to get trapped. Clean their skin folds regularly to avoid this. If your mixed breed’s eyes stick out like a Frenchie’s, then they could also be at risk of eye infections.

While Dachshunds are often healthier than French Bulldogs, they still have some common problems. Intervertebral Disc Disease (IVDD) is the most common, due to the long bodies of Dachshunds. So, avoid letting them jump on and off high surfaces, especially if your mixed breed has a long body and short legs.

Where to Find a French Bulldog Dachshund Mix

If you have your heart set on a French Bulldog Dachshund mix, it’s important to remember that it’s not a common hybrid, and it has a lot of health concerns. Purposely breeding dogs with flat faces can be dangerous to the puppies, so make sure you find a breeder that puts the dogs’ health above all else.

When looking for a breeder, don’t be afraid to ask lots of detailed questions about the mixed breed. If they refuse to show you where the dogs were bred or what their parents look like, then find somewhere else to get a dog. Breeders who sell through pet stores and websites only are likely puppy mills that are trying to limit their contact with you. So, it’s best to be extra cautious when looking for a dog breeder.

Since French Bulldog Dachshund mixes are a mixed breed, it’s also possible to find them at rescues and shelters. In many cases, the perfect dog for you isn’t the breed or hybrid that you’d expect. So, before turning to a breeder, check out your local shelters to meet the amazing dogs that are already looking for forever homes.

French Bulldog Dachshund mixes aren’t common mixed breeds, but of course, they’re adorable and friendly. Yet, choosing a dog should never be solely based on their looks. If this is the mixed breed you want, be sure to do plenty of research first to make sure they’re the right fit for your home.

Mixed breeds can be unpredictable, so a French Bulldog Dachshund mix might not end up being exactly what you expect. Even so, it’s likely that these cute hybrids will share some of the lovable characteristics of Dachshunds and French Bulldogs.

Dachshund Schnauzer Mix: Stubborn To A Fault But Loyal To The End
Next Post: Top 7 Best Shiba Inu Breeders In Florida (FL) State