Also known as a Golden Dox, Golden Weenie, or Golden Dachshund, this mixed breed comes from a Dachsund and a Golden Retriever mating. Usually, the mom is a Golden Retriever and the dad is a Dachsund. It can be unhealthy and dangerous if the Dachsund is the mom due to the large size difference. They are very unique dogs with varying personalities, appearances, and traits. In this article, we will talk about what you can expect from a Golden Dox as well as the pros and cons of getting one.

The Good and The Bad of the Golden Dox

There are many reasons to consider a Golden Dox as your companion, but it is important to consider all of the cons as well.

History of the Golden Dox

Golden Doxies have considered designer breeds as it is a purposeful mix of two purebred dogs. Designer breeds gained popularity in the 1980s and have been increasing in popularity ever since. The parents of the Golden Dox are the Golden Retriever and the Dachshund. The Golden Retriever was developed in Scotland as a bird dog with a “soft mouth” that doesn’t damage the birds it retrieves from the water. Dachshunds are small hounds bred in Germany more than 600 years ago. It was designed to flush badgers out of their holes. Two dogs with very different backgrounds and appearances mean that each Golden Dox puppy is going to vary greatly, even between siblings in one litter!

Overall, you can expect your Golden Dox to be loving and affectionate. They will probably want to be with you whenever you are home and will be sad if they are left alone for long periods of time.

As stated previously, the appearance of a Golden Dox can vary greatly. They can be anywhere from Dachshund sized to Golden Retriever sized. This means you could end up with a 10 lb dog or a 60 lb dog, and they could even come from the same litter! Sometimes, they can look like a Golden Retriever-sized Dachshund with fine and short hair. Other times, they look like a Dachshund-sized Golden Retriever with shiny and silky medium-length fur. If the parent is a long-coated Dachshund, it can be fairly certain that the puppy will grow up to have longer hair. If the parent is a wire-haired Dachshund, the puppy could have wiry hair. After the puppies grow a little bit, the breeder may know what the puppy will grow up to look like or at least have a guess on the size and appearance. The only way to know what the dog will look like is to wait for it to grow up! It can be an exciting surprise!

Color-wise, a Golden Dox can be any color a Dachshund or a Golden Retriever can be. They can have markings as well. Generally, they are golden, but can also be red, merle, cream, blonde, black, or brown. The rarer colors are spotted and merle in color, as that is usually a recessive trait that Golden Retrievers don’t have.

How Long Will My Golden Dox Be Around?

Golden Doxies usually fall between the life expectancy of their parents. You can expect your Golden Dox to live around 14 years with proper care and if they remain relatively healthy. This is a bit longer than a Golden Retriever, but a bit shorter than the Dachshund. Larger dogs tend to have a shorter lifespan than smaller dogs. Mixed breed dogs are less likely to have the recessive genetic diseases of the parent breeds, which usually gives them a longer and healthier life.

You can expect to brush your Golden Dox daily, no matter the coat. They will probably shed as both Dachshunds and Golden Retrievers shed. Depending on which parent the dog takes after, they may need additional grooming. If they have more of a Golden coat, they should be seen by a groomer especially during seasonal changes to de-shed and trim. Golden Retrievers have a double coat which can shed a lot during changes in the seasons. If the dog has a short coat like a short-haired Dachshund, it will shed more. It also is important to check their ears and nails routinely to make sure they are appropriately cleaned. Dental hygiene is another important aspect of grooming. Brushing your dog’s teeth may seem odd to some, but it is important to maintain your dog’s oral health!

How Much Exercise Does a Golden Dox Need?

A Golden Dox needs a moderate amount of exercise. A good hour of play or a good long walk once a day will help them get the needed exercise, especially if they are mainly indoor or apartment dogs. Generally, the larger the dog the more energy they have, so if the Golden Dox is bigger they may need a bit more playtime.

Feeding and Nutrition of Golden Dox

Because each Golden Dox varies, it is important to make sure you are feeding them appropriately. Small dog food for a Dachshund will not be appropriate for a Golden Dox that is closer to a Golden Retriever size. Make sure to check with your veterinarian to ensure you are feeding your dog appropriately. It is also extremely important you don’t overfeed your dog, as obesity is a common health issue of Golden Retrievers and Dachshunds. Obesity can increase the likelihood of IVDD and joint issues. Along those lines, it is a good idea to focus on using healthy treats, like carrots, to avoid adding unnecessary calories to your dog’s diet.

How Easy is it to Train a Golden Dox?

If your Golden Dox takes after its Golden Retriever parent, training will be a breeze. Goldens are eager to please their owners and will work hard to do what they are told. Dachshunds, on the other hand, are more stubborn and it will take more patience if your dog takes after their Dachshund parent. Both dogs are smart, but the stubborn dachshund does not always like to obey. As mentioned in the “Feeding and Nutrition” section, it is a good idea to avoid high-calorie treats and choose healthy treat options to assist in avoiding weight gain.

Does a Golden Dox Do Well With Children?

If you have children, keep in mind that the size of your Golden Dox. Kids may be rough with small dogs that can cause injuries. Dachshunds can also act like herding dogs and can be nippy with children; this can be a temperament trait passed to Golden Doxies as well. It is important to monitor Golden Doxies with small children, especially if they are meeting for the first time.

Does a Golden Dox Get Along Well with Other Pets?

Golden Retrievers tend to get along with most animals, even small pets like guinea pigs. Dachshunds have a greater prey drive and may view animals smaller than them as prey. If you are considering getting any other animals, make sure to introduce your Golden Dox to them while they are a puppy. Early introduction can help acclimate your Golden Dox to different animals and socializing at an early age can help them be okay interacting with other pets. It would still be a good idea to supervise all interactions your Golden Dox has with animals smaller than it. This is especially true if the other pet is a type of rodent, like a rabbit or a guinea pig.

How Much Does a Golden Dox Cost? 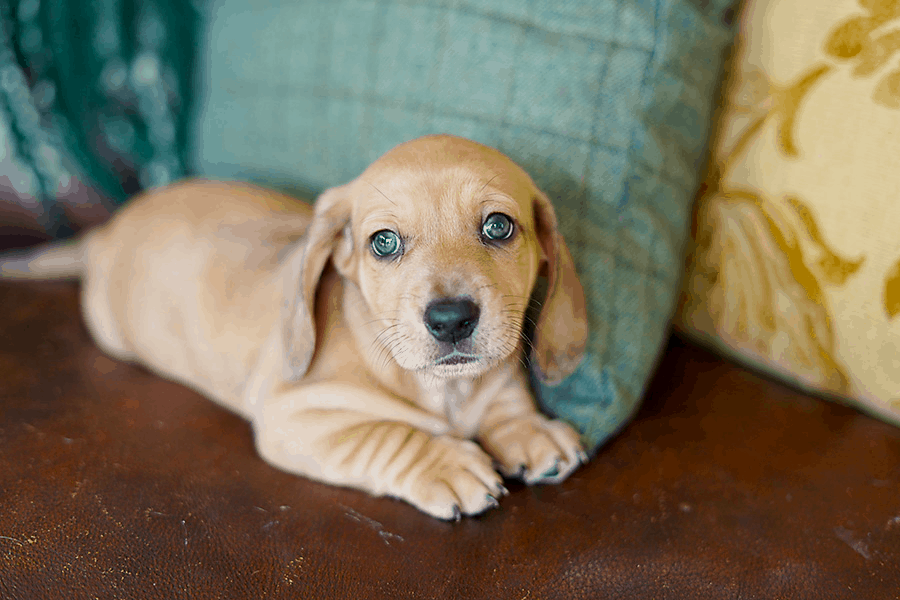 Generally, a Golden Dox costs between $500 and $1000. It is important to remember that looking for a deal when looking for a dog isn’t always the best option. Quality breeders that test their dogs for health issues are worth spending a bit more if you can be more assured that your puppy will be healthy. Adoption is also an option if you want to find a Golden Dox that needs a home. Golden Dox breeders can be hard to find due to the difficulty in breeding a Golden Retriever and a Dachshund. People may also not want to breed Golden Dox’s because of the generally wide range of possible outcomes and inability to guarantee size or appearance.

Is a Golden Dox right for you? It depends. It is important to remember that it is hard to determine what the puppy will grow up to look like or how large they will be. You need to be prepared to accommodate the dog whether they are the size of a Dachshund or a Golden Retriever. If you want to make sure your Golden Dox is appropriately sized, it might be a good idea to look for an older dog to adopt that is already fully grown. It’s also important to consider the possible health issues that can occur. However, if you are looking for a dog that will turn heads with its unique look, a Golden Dox may be a perfect choice.