The Australian Shepherd and Dachshund mix usually called an Aussie Doxie, is an adorable designer breed that is not very common at this time. They often have shaggier hair than the standard Dachshund paired with squat legs and an oval body. They can have gorgeous coloring, but it can be hard to tell exactly what the little puppies are going to grow up to be since people rarely breed them on purpose and even accidental breedings are rare. However, there are some facts to learn before deciding if the Aussie Doxie is right for you and your family. We will go over all of the information out there so you can learn a bit more about this spunky mix.

What is an Australian Shepherd Dachshund Mix?

The designer breed coined as the Aussie Doxie comes from a Dachsund and an Australian Shepherd breeding. Usually, the dad is a Dachsund and the mom is the Australian Shepherd, but it can go either way. They are usually medium in size with longer hair. They are energetic dogs that exhibit the best of both breeds. Read on to find out what the pros and cons of adopting an Aussie Doxie are and what to expect from one of these unique dogs.

Pros and Cons of Getting an Aussie Doxie 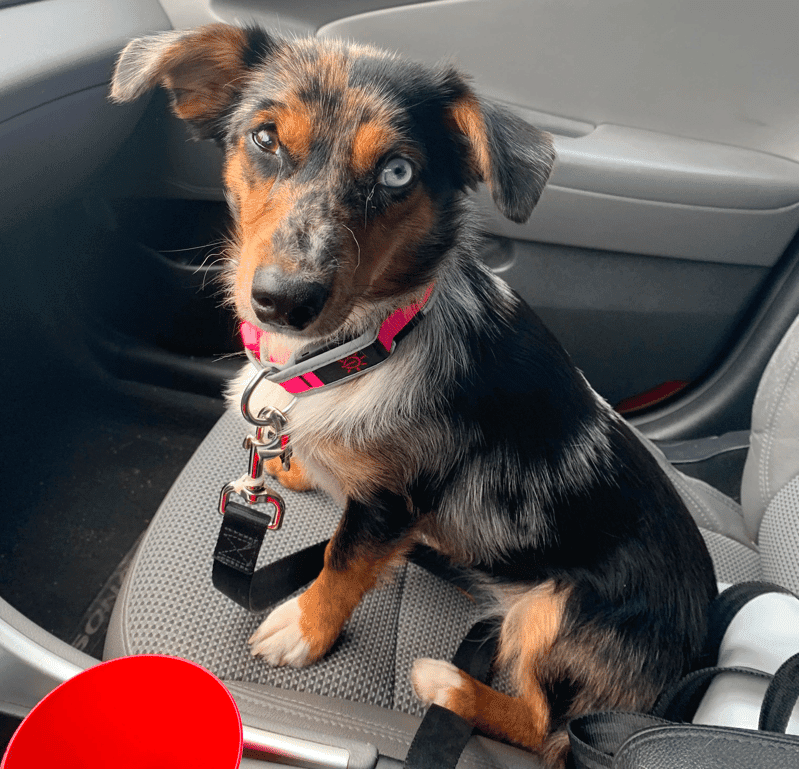 There are many reasons to consider an Aussie Dox as your companion, but it is important to consider all of the cons as well.

History of the Aussie Doxie

A designer breed is a purposeful mix of two purebred dogs. Aussie Doxies aren’t necessarily popular designer breeds and are a newer type. Because they are so new, relatively little is known about them.

The Australian Shepherd itself is a relatively new American Kennel Club that was only recognized as an official breed in 1993. The Australian Shepherd, or Aussie, was developed in the United States, not Australia as the name may imply. It was designed to be a herding dog. They are instinctively driven to herd animals and even children.

Dachshunds are small hounds bred in Germany more than 600 years ago. It was designed to flush badgers out of their holes. Two dogs with very different backgrounds and appearances mean that each Golden Dox puppy is going to vary greatly, even between siblings in one litter!

Aussi Doxies can vary greatly in appearance. Generally, they are medium-sized dogs, though that just means they can range from fifteen to forty-five pounds. The bigger the parents, the bigger the puppy. Thus, you can expect a mini-dachshund parent to have smaller puppies in the end.

The color of the Aussie Doxie can be from a wide range. You can expect a puppy to be bi-colored (have two colors) or solid. The colors are usually cream, black, chocolate, red, or blonde. There can also be more unique colorings such as merle, blue, and tri-color. The easiest way to determine what the puppy’s coat might end up looking like is to look at the parents and grandparents to see what their colors were.

Their coat is usually long. The texture can be straight or wiry and is usually dense. If they take after the Australian Shepherd parent, you can expect them to have fluffier fur. Sometimes the puppy can grow up to have a shorter coat as a typical Dachshund has.

Aussie Doxie lifespans usually fall between the life expectancy of their parents. In general, they can live between 13 and 17 years depending on their health. Dogs that regularly go to the vet, are appropriately cared for and are genetically healthy tend to live longer. If your dog is obese or not appropriately exercised it can shorten its lifespan.

How much Grooming Does A Aussie Doxie Need?

It is important to remember that Dachshunds have sensitive skin so bathing too often can cause them to have dry skin. Make sure to only bathe them when necessary or take them to a groomer that knows how to groom Dachshunds and Dachshund mixes.

Regularly brushing your dog’s teeth or giving dental chews is also important to help with their oral health.

How Much Exercise Does an Aussie Doxie Need?

The Aussie Doxie needs a moderate amount of exercise. If the puppy is more like its Dachshund parent, a good walk or some playtime will be enough exercise. However, if they demonstrate having more Australian Shepherd energy, they will need more exercise and will do better with a large yard. Australian Shepherds are working dogs and need room to run around.

It is important to remember that even though people run with their Australian Shepherds, Dachshunds are not made for jogging. They can easily damage their spine if they are taken on anything faster than a walk. Playing with toys like a frisbee or a tennis ball is a great option to get them running without putting them through a strenuous run.

A poorly exercised Aussie Doxie may take out their pent-up energy on your furniture or shoes. A bored dog is often a destructive dog.

Feeding and Nutrition of Aussie Doxies

Because each Aussie Doxie varies in size and shape, it is important to make sure you are feeding them appropriately. On average, one-and-a-half to two-and-a-half cups of dry food should be split between two meals and will be plenty of food for the Aussie Doxie. The smaller the dog, the less food it needs. Most dogs are fine with dry food, but if you want to add some wet dog food to your dog’s meal, make sure to adjust the amount of dry food so the

Make sure to check with your veterinarian to ensure you are feeding your dog appropriately. Remember that obesity is a health concern. Overfeeding your dog can cause health issues and should be avoided.

How Easy is it to Train an Aussie Doxie?

It is not the easiest to train an Aussie Doxie. They are very intelligent, but that can mean they are too clever for their own good. They will try to weasel their way out of training and get their treats for free.  Dachshunds are very stubborn and Aussie Doxies can inherit this trait. It can take work to make sure your dog listens to you.

A good option is to hire a professional trainer to help you. This could mean a private trainer or a puppy class to help with guidance.

Does an Aussie Doxie Do Well With Children?

In general, Aussie Doxies do well with children they know. This mixed breed does not like strangers and any introductions must be done carefully with the child not frightening the dog. It is also important to remember that the Australian Shepherd is a herding dog and that if the Aussie Doxie inherits this trait they will try to herd the children which could include nipping.

Does the Aussie Doxie Get Along Well with Other Pets?

It is not recommended that Aussie Doxies are left with any smaller pets like guinea pigs. They are herding and hunting dogs so they can try to do both to any animal. Other dogs and cats are generally okay as long as the dog is introduced to them appropriately and well socialized.

How Much Does an Aussie Doxie Cost?

Due to it being a relatively new designer breed, it is hard to know what the cost will be. Australian Shepherds cost between $400 and $1,500 while Daschunds cost $500 to $700. Ou can expect a breeder to sell an Aussie Doxie for somewhere within those two ranges, though it is currently hard to find a breeder of Aussie Doxies.

Another option is to find an Aussie Doxie to adopt from a shelter. This is probably going to be your best bet at finding an Aussie Doxie, though they can still be hard to hunt down.

Do Aussie Doxies bark a lot? Yes, both parent breeds are barkers so you can expect an Aussie Doxie to bark

Can Aussie Doxies be left alone? No, they are sensitive dogs that need to be active so they do not do well left alone, especially if it means they will be locked up inside all day.

Do Aussie Doxies sleep a lot? No, they are relatively active dogs

Are Aussie Doxies big chewers? Yes, you can expect them to chew if they are bored or have pent-up energy.

AreAussie Doxies good with children? Yes, though they will nip and try to herd any children if they are not trained not to.

Is the Aussie Doxie a good option for your family? If you are an experienced dog owner looking for an active dog with a unique look, they certainly can be. A prospective owner just needs to be aware of the challenges that come with an Aussie Doxie such as their stubbornness and their herding instinct. If you are ready for this, you will find a great puppy in an Aussie Doxie.

Other Most Popular Dachshund Mixes