A Great Dane Dachshund Mix is often viewed as an “impossible breed.” Mixing a massive dog with a tiny dog isn’t something that’s safe or natural for the dogs involved, so many experts are against it. Yet, this hybrid dog has been created before, so there’s a chance that you could come across one.

If you find a mix of a Great Dane and a Dachshund, what should you expect? Let’s take a look at the history, health concerns, and care requirements. 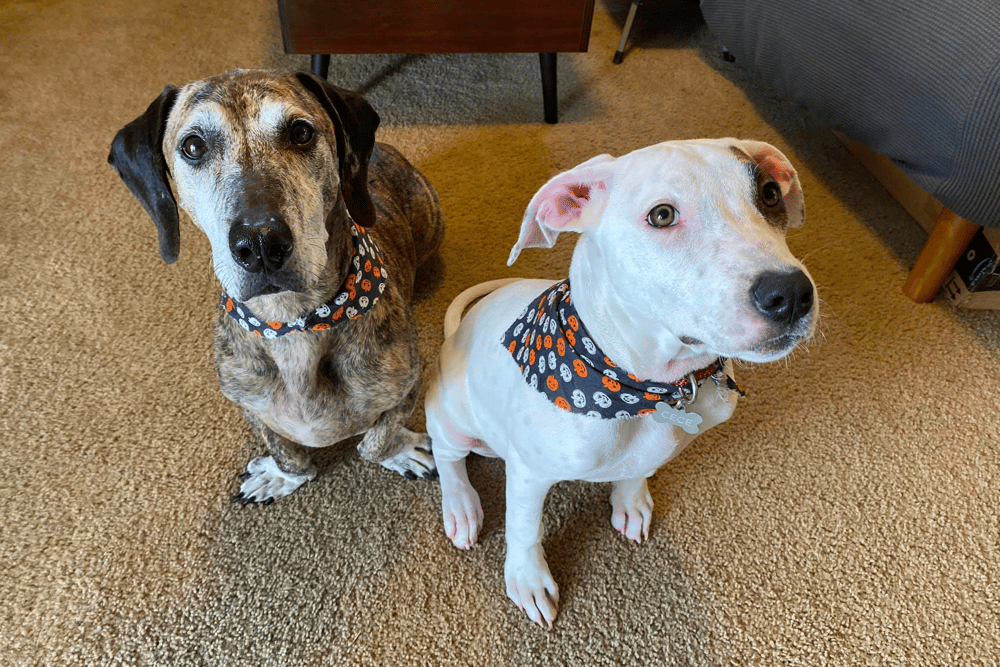 Before we get into the details of a Great Dane Dachshund mix, let’s look at how these dogs compare to their purebred parents.

Why Should You Not Breed Dachshunds and Great Danes?

While there are Great Dane Dachshund mixes in the world, they’re not a “natural” mixed breed. So, you won’t find them unless someone purposely bred them together. Yet, most reputable breeders are against breeding two drastically different breeds.

The main reason that breeding Dachshunds and Great Danes is a bad idea is that they’re extremely unpredictable. They could be a wide range of sizes, so it’s hard to prepare for one of these puppies. Their energy levels and personalities could also vary more than your average mixed breed.

You never know what health concerns they’ll pick up from their parents. Plus, since most of the places they come from are puppy mills pretending to be reputable breeders, they’re likely to have many health concerns early on. Dachshunds and Great Danes are both prone to joint and back problems, so those are just some of the many concerns the puppies could inherit.

Since this mix is rarely bred, it doesn’t have a history. Both of the parent breeds came from Germany, but it’s unclear when and where they were bred together. Since the hybrid is so rare, it doesn’t have an official name.

Dachshunds are hound dogs that were used for hunting. Their short legs and long bodies made them perfect for hunting creatures in dens, such as badgers. Today, they’re more commonly used as companion dogs, but they’re still very curious and love to follow their noses.

Great Danes are massive dogs that were bred to hunt large animals, such as boars, deer, and bears. These dogs were also commonly used for protection. Today, they’re gentle, the laid-back family dog, but they’re still very loyal to their humans.

Since both of these breeds were bred with jobs to do, it’s likely that a mix of the two will also have hunting skills if needed.

There are no consistent traits for a Great Dane Dachshund mix, but like all mixed breeds, we can guess how they’ll behave based on their purebred parents.

This mixed breed is likely to have a friendly, playful, and gentle personality. Despite being so different, Dachshunds and Great Danes are both great family dogs, so it makes sense that their puppies would too.

Both breeds are overall happy dogs that want to be close to their humans as much as possible.

Both breeds have medium to high energy levels because they’re working dogs. Dachshunds love to explore due to their hunting instincts while Great Danes need a lot of exercises to tire out their large bodies.

Great Dane Dachshund mixes are sure to have plenty of energy too, especially at a young age. However, since they may inherit joint problems from both parents, they could slow down rapidly as they age. So, they’ll need to go on plenty of adventures without straining themselves too much.

Dachshunds and Great Danes are usually friendly dogs. So, a Great Dane Dachshund mix will probably get along well with most people and animals.

However, like any dog, you should make sure to socialize them as they grow up. The more people and dogs they interact with, the better behaved they’ll be in public settings.

Mixed breeds tend to be a bit unpredictable, especially when the two parents are so drastically different. A Great Dane Dachshund mix will likely pick up traits from their parents, but let’s look at the possibilities.

Dachshunds can be pretty much any coat color, including red, cream, black and tan, blue and tan, or chocolate and cream. Great Danes also have a lot of versatility, including colors like fawn, black, harlequin, merle, gray, brown, and white.

So, a Great Dane Dachshund mix could get any of these unique color patterns, sometimes creating an unexpected appearance.

Size is one of the biggest surprises with this mix. Dachshunds are usually under 20 pounds while Great Danes can reach well over 100 pounds. So, the result is often somewhere in the middle of the two. About 50 pounds and 16 inches tall are good estimates.

A Great Dane Dachshund mix won’t need to visit the groomer for a haircut. Yet, they’ll still have other grooming needs that need to be taken care of.

Dachshunds have moderate shedding while Great Danes shed more often. So, no matter what, a Great Dane Dachshund will shed at least moderately. Brushing them at least once a week can help control the shedding.

All other grooming needs are the same as they are for most dogs. Occasional baths can help keep your dog clean, but they really only need to be bathed when they’re dirty or stinky.

You’ll want to clip their nails at least once a month. You can do this at home with a dog nail clipper or grinder, but if you don’t feel comfortable, you can have a groomer or vet do it for you. If their nails get too long, you might need to trim them more often until they go back to a healthy length.

Brushing your mixed breed’s teeth is also important. Regular teeth brushing prevents tartar from building up and causing dental disease in the future. It’s recommended that you brush their teeth about twice a week. However, more often than that can’t hurt.

Regardless of their size, a Great Dane Dachshund mix will need lots of exercises. Small Dachshunds and massive Great Danes both love to walk, hike, run, play, and explore. So, giving them about an hour of exercise a day can help keep their content.

Since both dogs have some hunting instincts, it’s a good idea to take them to different places for walks. Visiting parks and new neighborhoods can give them new smells to explore. Otherwise, they might grow bored if they only walk around the same area every day.

However, as a Great Dane Dachshund mix ages, you’ll want to take it easy to avoid hurting their joints. Take them to the vet more frequently to make sure you catch any health issues early on.

Dachshunds can have a stubborn side, but Great Danes are obedient dogs. So, it’s likely that a Great Dane Dachshund mix will be fairly easy to train as well. Yet, dog training always requires patience, commitment, and consistency.

When training your dog, remember to focus on positive reinforcement instead of punishments. Punishing your dog will make them fear you while praising them will help you form a closer bond. These tactics are true for any dog breed.

To keep your dog focused, choose a treat that’s low in calories, but still super tasty for them. It may take some time to learn your dog’s treat preferences, but most dogs aren’t picky when it comes to snacks.

It’s difficult to tell what a Great Dane Dachshund mix will need to eat since you won’t know how big they’re going to get. Since they’re usually medium-sized, they’ll likely need a cup or two of kibble each day. That amount may vary based on their age, weight, and activity level.

When choosing food for your Great Dane Dachshund mix, be sure to look for a high-quality diet. Their food should be full of real protein while also avoiding fillers and by-products. If you’re having a hard time deciding which brands are healthiest, take a look at the ingredient lists before making a decision.

As mentioned earlier, Great Dane Dachshund mixes are likely to gain some health concerns from their parent breeds. These are more common for these dogs than for other mixed breeds, which is why most reputable breeders don’t support breeding these dogs together.

Here are the most common health concerns:

Of course, if you find one of these mixed breeds at a shelter, that’s a better option since you didn’t encourage unhealthy breeding practices. Yet, if that’s the case, you’ll want to visit your vet regularly to keep an eye out for these concerns.

The Great Dane Dachshund mix is a unique hybrid dog, but experts warn dog lovers of the dangers of breeding them. They are prone to a lot of health concerns and are very unpredictable, so don’t overlook those things just because the dogs are cute.

However, you might be able to find one of these mixes at a shelter or rescue. After all, there are plenty of adorable mixed breeds already searching for forever homes. Your perfect dog might already be out there somewhere!

The Mauxie: A Little Dog with A Lot of Moxie!
Next Post: Top 10 Best Dachshund Breeders In Iowa (IA)