The Dachshund Schnauzer mix or Schnoxie, also known as Schauzund is a relatively new hybrid crossing the Dachshund and the Schnauzer. The result is a hybrid that has become quite popular with pet parents looking for a pup that’s adorable with a sweet personality.

The suggestion is that these dogs first appeared in the 1990s but where they originated is uncertain. Let’s learn about this fun breed together.

The most common alias for the Schnauzer Dachshund mix is “Schnoxie,” but it doesn’t stop there. You’ll find a few other references for the spunky pup.

Some people call the canine a “Schauzund” or “Merle Schnauzer,” and some simply say “Miniature Schnoxie.” Regardless of what you prefer, the animal is the combination of a Miniature Schnauzer and either a Miniature or Standard Dachshund pup.

Each of these dogs on their own carries significant favor among pet parents, so it’s no surprise the designer dog is gaining substantial popularity.

As a rule, the “Schnoxie” bears the short legs of the Dachshund with coats coming in variations from wiry, sleek, and smooth, and occasionally you’ll see a long-hair.

The dog might be small (to medium size), but he comes with a big personality, one that might prove somewhat independent and stubborn. That doesn’t mean he’s tough to train; just that pet parents need to be consistent and persistent with their methodology.

History Of The Schnauzer Dachshund Mix

In order to understand the history of the Schnoxie, it’s essential to look at the parents. The Dachshund and Schnauzer were both initially bred for hunting purposes. Each parent originated in Germany.

The Dachshunds came in the 1800s with their hunting specialty being flushing badgers and other den animals from the homes for hunters.

The dogs develop with elongated bodies capable of maneuvering into the holes, after which they would bark loudly to alert their companion, human hunters, that they were successful in tracking their prey.

The Dachshund is a lovable, loyal and protective family-oriented canine that pet parents adore.

As with the Doxie, the Schnauzer also originates from Germany, with the first appearance tracing back to the 1400s. The pups were described as strong and brave, which farmers would take advantage of as the dogs would protect the homeland from rodents and rats.

The name “Schnauzer” means “a small beard” and comes from a single dog that came into existence in the year 1879. These pups are brilliant but prove independent and stubborn, plus they are exceptionally vocal. 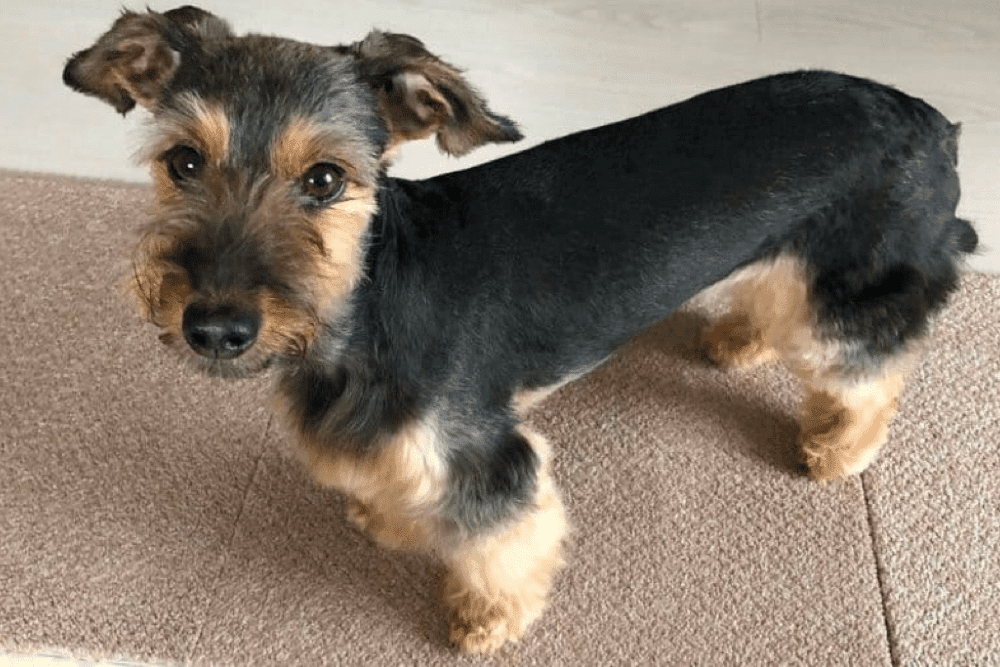 There’s no way to determine whether your Schnoxie will produce a wiry Schnauzer coat or develop a sleek, smooth, coarse wirelike, or long kind of curly fur of the Doxie. What the pup inherits will be a wait-and-see surprise for the pet parents.

As a rule, the Miniature Schnoxie will have a build between small to medium with a height ranging between 10 and 14 inches and weight that can be as little as 15 pounds or as great as 30 pounds.

The pup will typically receive the Doxie’s short legs, but these are strong, plus they’ll have a deep, broad chest and body. The body will be elongated, albeit muscular, with ears that either flop partially or all the way and long muzzles. Coat colors will commonly fall in brown, black, silver, or white.

Temperament And Personality of The Schnoxie 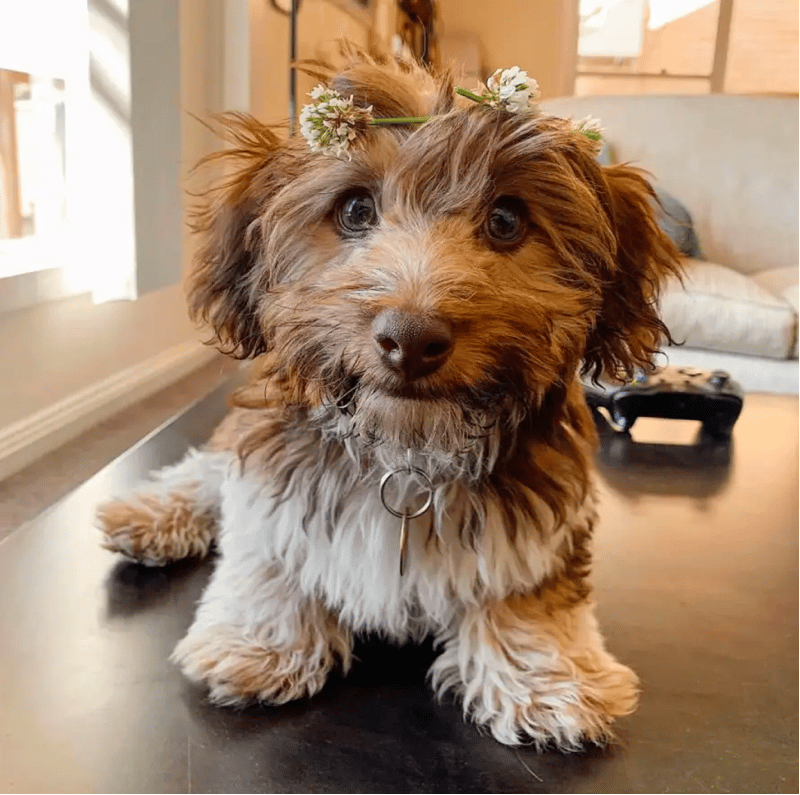 The dominant parent will determine Schnoxie’s demeanor. The Schnauzer/Dachshund mix has the potential for inheriting countless combinations of traits from their parent’s personalities, including their distinctive behavior.

No one can determine how a crossbreed will behave accurately. Still, the designer dogs have a reputation for being faithful companions with cheerful personalities that get along well in their families and with other pets as a loyal and loving addition.

The Schnoxie is a protective hybrid calling on the Dachshund’s aggression and the alert nature of the Schnauzer. At the same time, the dog is cheerful and playful, requiring adequate time and attention from their family, their leary of strangers.

Does The Schnoxie Make A Good Family Pet?

While the pup will need early socialization as most canines do, the Dachshund/Schnauzer mix boasts the capacity to be an incredible family pup and an excellent companion for kids.

Socialization with the children early is essential, allowing each to acclimate and eliminate natural insecurities.

The dogs will also do well with other pets, including cats if pet parents introduce them while young but pet parents need to monitor new dogs with kids and other animals until everybody has become comfortable with each other.

These dogs (and their parents) are known for loud voices, and they are vocal which can be a little intimidating for kids and put other animals on guard.

Given his breeding, the hybrid is a super-intelligent breed, but he is also a challenge to train. The Doxie and the Schnauzer are both known for their willfulness and stubborn personalities, which doesn’t go unnoticed in the Schnoxie.

Many pet parents might find that the clever animal needs a bit more experience in the training realm than what an average parent can provide.

The suggestion is that a first-time pet parent might want to avoid the Schnoxie as their first pet. Even seasoned pet parents should consider the option of professional dog trainers if the Schnoxie is a new breed for them.

Exercise Needs For the Schnoxie

Given the fact each parent was bred for hunting, the offspring will naturally be high energy and require effective exercise to burn that energy.

Schnauzers tend to become anxious if they don’t receive sufficient physical stimulation, while Dachshunds can get into mischief if their energy is not released.

The Schnoxie is not a dog that will want to lounge on the couch all day and won’t be content in that kind of atmosphere. He will need at least 40 minutes to run and play on a given day to avoid boredom.

Once a dog becomes bored, it will find ways to entertain itself, which typically involves destructive behavior. You also don’t want to forget to provide mental stimulation through the use of interactive play toys.

The Schnoxie tends to shed on a moderate level since they might take after the Miniature Schnauzer with their coat with minimal chance for producing an entirely sleek coat.

Most will have a semblance of a wiry coat, and these require routine brushing and occasional trimming, so the length is manageable.

Bathing is something the pup will need only periodically. The suggestion is to invest in “deodorizing wipes” as an alternative to giving a full-on bath for cleanliness and a fresh smell.

Some pet parents are intimidated by the trimming process, whether the animal’s hair or nails. Rather than stress the dog or yourself, it’s wise to invest in professional services occasionally.

Feeding And Diet For The Schnoxie

The full-grown hybrid should receive a single cup of higher quality dog food that a pet parent will divide into two meals each day. It’s wise to check with a vet for recommendations on your specific pup’s ideal brand and type of food.

In addition, the pup needs clean, clear cold water refreshed regularly throughout the day. Each time you take a walk into the kitchen, change it out so it’s always fresh for the pup.

The Lifespan Of Your Schnoxie

The healthy Schnoxie boasts a lifespan on average of roughly between 12 and 15 years. Many variables contribute to this number, including the care they receive and the pup’s overall health and genetics,

Possible Health Problems With The Schnoxie

As a rule, the Schnauzer/Doxie Mix boasts an overall healthy pup. Still, it’s essential to always consider the potential health concerns of a dog before committing to the breed.

This dog includes Intervertebral Disc Disease (IVDD) of the spine, “progressive retinal atrophy,” and the possibility for kidney stones. These canines are at greater risk for obesity and pancreatitis. The Doxie parent is susceptible to seizure and skin disorders with the potential to pass that on to any offspring.

Breeders And Cost Of The Hybrid

It’s critical to do your research if the Dachshund/Schnauzer mix is the pup you have decided is the addition you want to make to your household.

The word on the street is few well-established breeders are offering these specific designer dogs, unlike the parent purebreds or more popular hybrids.

That means you will need to be patient, putting forth more time-intensive effort to find a quality breeder. These might be online and may not be in your specific local location.

The suggested retail for this specific mix is roughly between $500 and $1000 + depending on if the pup is of show quality. If you are only interested in a faithful family companion, there will likely be a budget-friendly option on the market. Rescue is always the ideal choice for adopting a pup.

Is the Schnoxie Right For You? 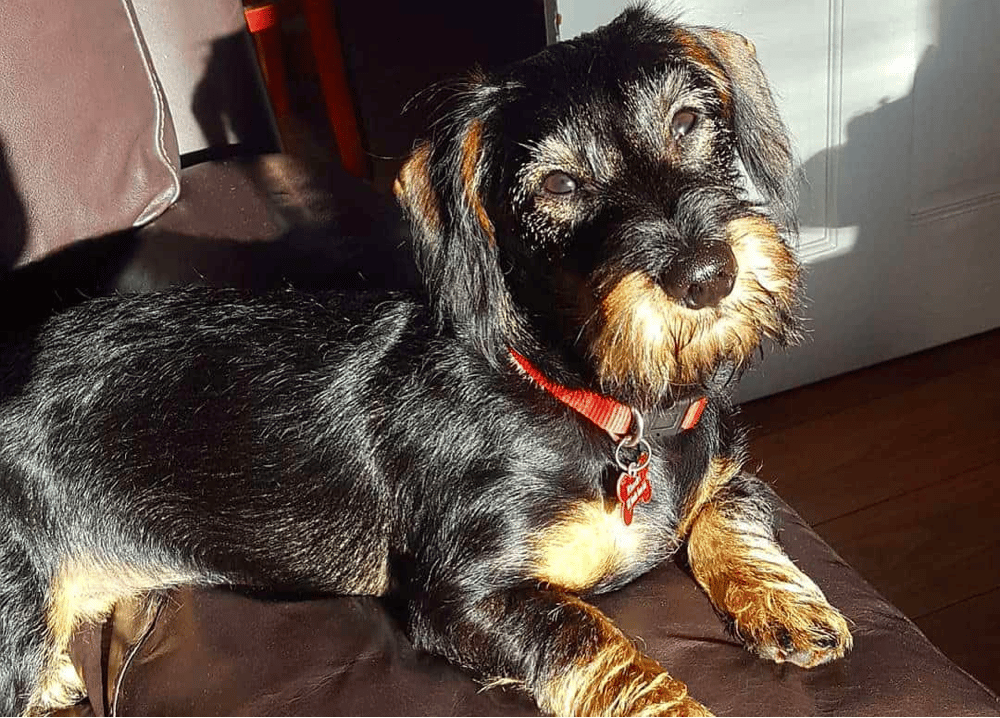 In shelters and rescue centers, you can often find designer breeds and relatively affordable prices. Still, often these pups come with health concerns and sometimes age that is undesirable to many.

If you genuinely want a Schnoxie, not for show purposes, but to be a member of your family, you’ll know it’s the right pet for you because age won’t be an issue, and you can nurse the right dog back to better health.

Regardless of age, pups can be trained to be around kids and other pets mostly because they want to please their pet parents. While these dogs can be more obstinate than most, the right dog trainer can help you train them to their full potential. Schoolies have a love for their families, the kids, and other pets.

It doesn’t matter how old they are, where you find them, or what issues they have; when the right pup comes into your life, you’ll work through their problems to bring them into your life.

The Popularity Of The Designer Dog

Designer dogs can sometimes develop a bad reputation, but the Dachshund/Schnauzer Mix has only positive feedback, with more people choosing the popular hybrid based on the parent’s reputation.

People adore the Dachshund and the Schnauzer, so a combination of the two is the best of both worlds.

As with any dog, a good pet parent will engage in socialization early to ensure the dog can develop adequate skills to interact with whomever they’re exposed to, especially the children in the home.

Kids will also need to acclimate to the pup, so there are no issues with the dog being stressed by a child poking and prodding at him. The Schnoxie is exceptionally vocal, so if he’s unhappy with what’s happening around him, he will speak his mind loudly, perhaps scaring a child.

Parental supervision is a necessity until these bonds are created. Once these develop, the family will have a faithful, loyal, and protective companion for the duration of the pup’s life.

It doesn’t matter if you rescue, adopt, or choose a breeder to find the new addition to your family. The most important thing is that you realize the responsibility and commitment a new puppy brings, and you can welcome him into a good home.