When you think of the fastest animal on four legs, you probably don’t immediately imagine a dachshund. A wiener dog’s long, stout body and short legs are built for hunting and digging, not speed. However, if your dachshund has ever spotted a squirrel while out on a walk, you probably already know that dachshunds can and sometimes do move quickly.

How fast can a dachshund run? At top speed, a standard dachshund may be able to hit between 15 and 20 miles per hour. However, they won’t be able to sustain that speed for very long, and their short legs will tire quickly.

How far should Dachshunds run? There’s no exact distance beyond which it’s unsafe for dachshunds to run. The distance will vary from dog to dog. It’s far more important to pay attention to your dachshund’s comfort and energy level as you go than the exact distance they’ve run.

As you probably already know, dachshunds aren’t the best jogging companions, but they do need their exercise. We’ll cover what you need to know about taking your dachshund out for a healthy run without causing them back or joint problems. 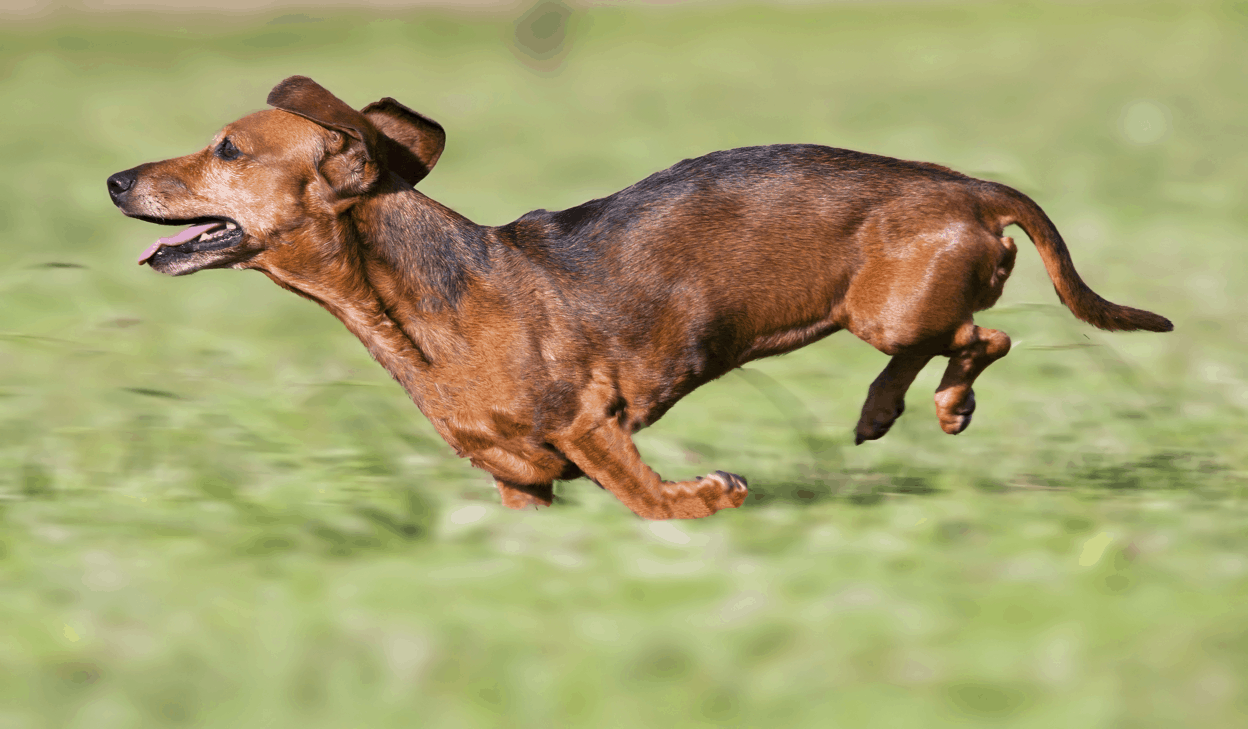 What is the Top Speed of a Dachshund?

Dachshunds are surprisingly strong dogs for their size, but strength doesn’t translate into speed in this instance. Their short legs relative to their body size don’t allow for long strides, which makes them one of the slower dog breeds. Standard dachshunds will be able to run a bit faster than their miniature counterparts simply owing to their slightly longer legs and larger muscles. However, the difference isn’t large. Dachshunds in general will only be able to hit a top speed of between 15 and 20 mph.

They aren’t the slowest dog breed, however. While there are not much official data on this distinction, bulldogs, pugs, and basset hounds may be slower. Much will depend on the individual dog, of course – an old, overweight dachshund will likely be much slower than a young, trim bulldog. On the other end of the scale, there’s plenty of data to show that greyhounds are the fastest dog breed. They can easily reach speeds of between 39 and 43 miles per hour. Of course, greyhounds were bred for speed, and most racing dogs endure training to learn how to run their fastest.

Here’s a chart comparing the top sprinting speeds of various animals. Note that the world’s fastest man Usain Bolt, who was clocked at an absolute maximum of 29.5 mph, would have difficulty keeping up with your average domestic cat. 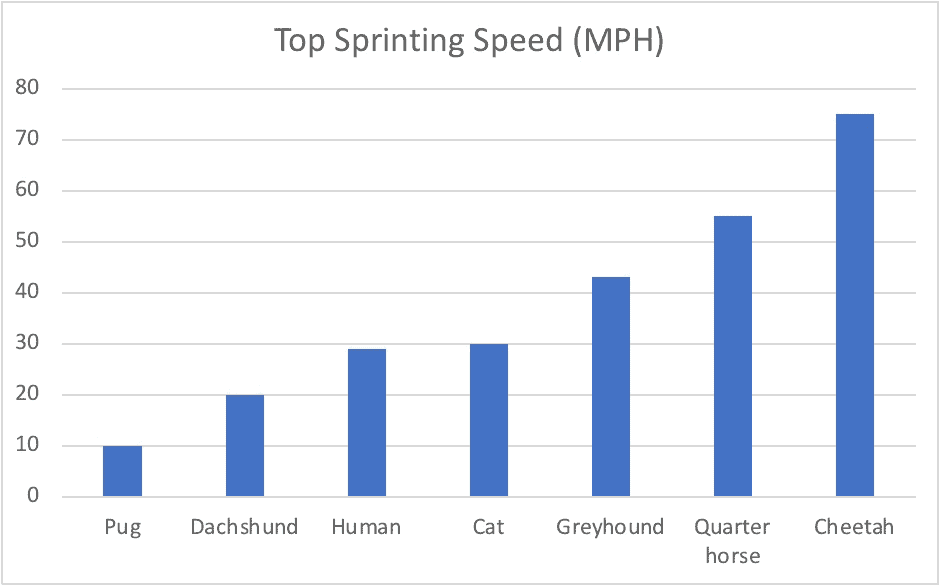 Is Running Bad for Dachshunds?

Unfortunately, the dachshund’s long back is prone to developing a number of health problems. Up to 25% of purebred dachshunds will suffer from intervertebral disc disease (IVDD) at some point in their lifetimes. This condition, similar to slipped or herniated discs in humans, can cause pain, limited mobility, and even paralysis. Dachshund owners must be careful that their dogs don’t put undue stress on the spine by jumping or tumbling. An injury doesn’t cause IVDD, as it’s an inherited genetic condition, but it can make IVDD symptoms worse.

However, running alone isn’t back for a dachshund’s back. Just like all dogs – and people, too – dachshunds need plenty of exercise to stay healthy and active. Running can be a great way for your dachshund to exercise. However, keep in mind that your dachshund’s legs are much, much shorter than yours. Just because they can run, that doesn’t mean that they’ll be able to keep up with you, especially over long distances. When running with your dachshund, start out slow and keep a careful eye on them. Take breaks and ensure they get enough water. Don’t try to push your dachshund longer than is safe. As long as you keep these things in mind, your dachshund can run safely.

Of course, if your dachshund is already suffering from IVDD, arthritis, or an injury, running may not be a good form of exercise. There are other, lower-impact forms of exercise like swimming that may be a better choice.

What Are the Benefits of Running for Your Dachshund?

As we’ve already said, running is an excellent workout. As a breed, dachshunds are both food-motivated and unfortunately prone to obesity. Carrying extra weight can actually make back and joint problems worse, so your dachshund needs plenty of exercise to stay healthy. Running is an easy way to get that exercise.

Additionally, while dachshunds aren’t known to be particularly hyperactive dogs, they do have plenty of energy, particularly when they’re young. A tired dachshund is less likely to get in trouble by barking, digging, or chewing things they shouldn’t. Running is a great way to let your dachshund use their energy in a positive, healthy way. It can help combat both anxiety and boredom.

Finally, running can be a great activity to bond with your dachshund. Lots of people like to bring their dogs with them on walks or runs, and there’s no reason a healthy dachshund can’t spend time with you outdoors. As long as you keep a close eye on your dachshund, running can provide excellent bonding time.

How Do I Know if My Dachshund Has Run Far Enough? 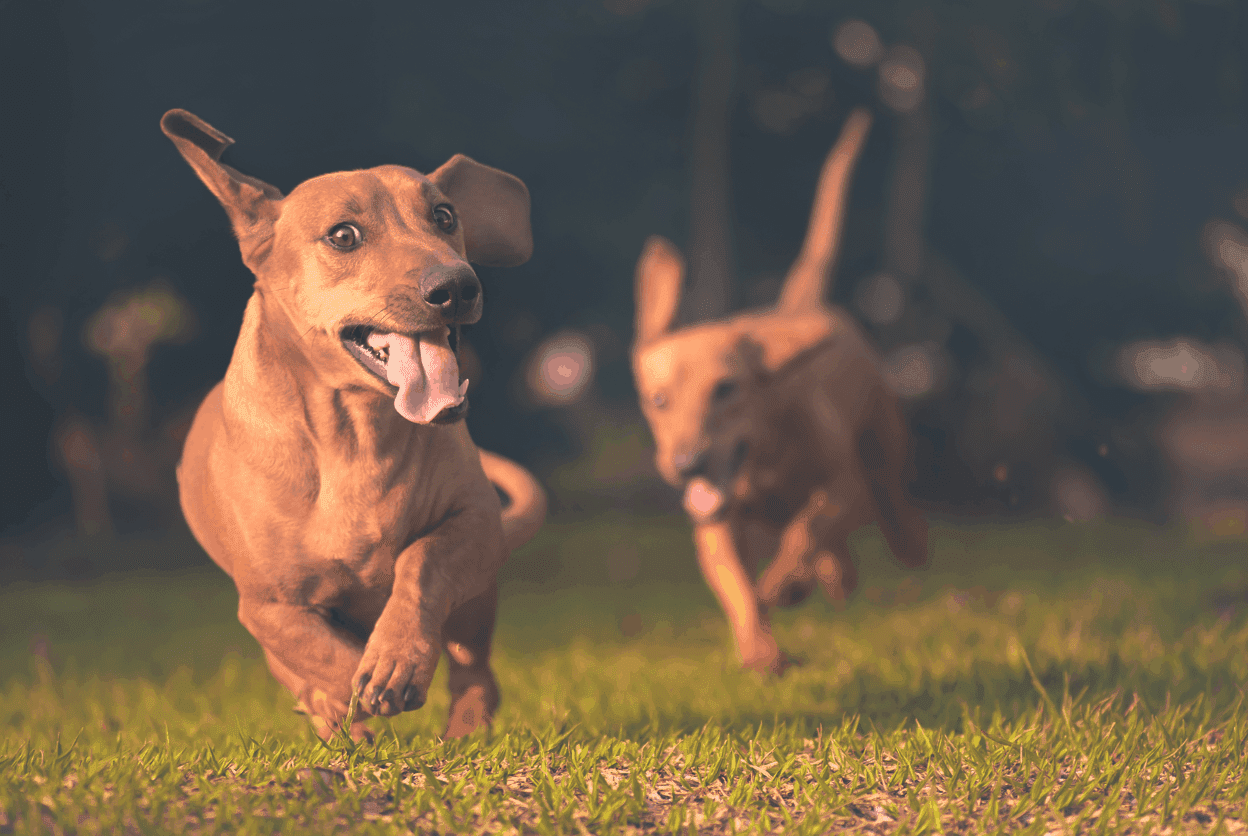 Unfortunately, there’s no exact time or distance that counts as “enough.” Instead, you’ll need to keep a close eye on your dachshund. In general, younger and healthier dogs will have more energy and thus be able to run longer than older, less healthy pooches. However, puppies are still growing up until the age of one or two, and running can put too much stress on a puppy’s developing joints. On the whole, young adult dogs tend to make the best running companions.

Essentially, you want to make sure you stop your dog from running before they become exhausted. The specific signs of fatigue may vary from dog to dog, but here are some signs to watch out for:

Remember, the goal is to stop well before your dachshund actually becomes exhausted. When you see them begin to tire, take a break or stop entirely. If you worry your dachshund is tiring out, it’s better to carry them than force them to keep running.

Should I Use a Collar or Harness for Running with my Dachshund?

While a collar may be fine for a quick walk, in general, you’ll want to take your dachshund out while wearing a harness. When a dog pulls on a leash while wearing a collar, that collar digs into its throat, compressing the windpipe and restricting the dog’s breathing. This is especially dangerous for small dogs like dachshunds and lunging while wearing a collar clipped to a leash can potentially break their hyoid bone or damage their larynx.

While dachshunds aren’t particularly fast dogs, they are notorious leash pullers. They have a great sense of smell and a strong prey drive, and that combination often means they seem like they’re walking you instead of the other way around. They may lunge or attempt to chase squirrels or birds. For all these reasons, it’s safer and healthier for your dachshund to wear a harness when out for a run.

Fortunately, there are plenty of lightweight harnesses that provide stability without trapping in body heat. That means they’re good for runs even on hot days. There are even harnesses that discourage your dachshund from pulling on their leash. Check out our article on the best dachshund harnesses to see which one is right for your sausage dog. 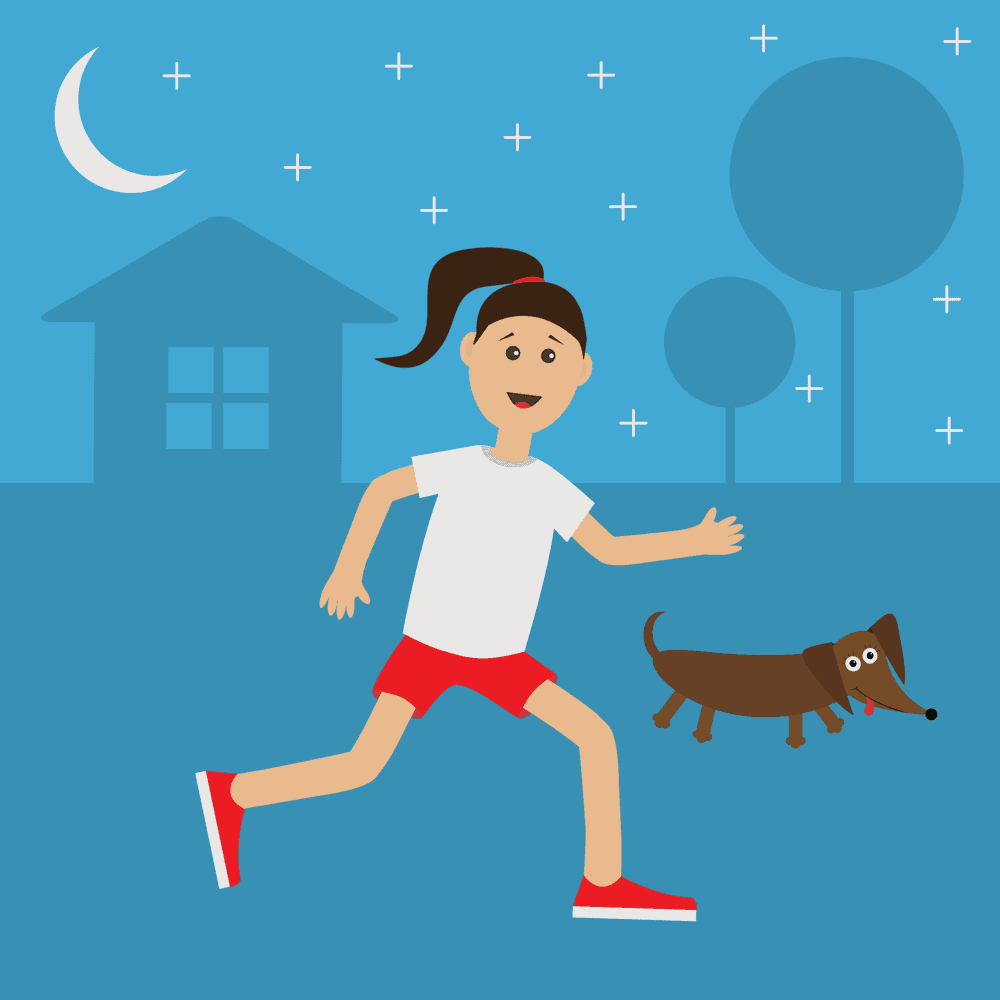 If you want to run with your dachshund, here are some steps to follow:

Above all, stay in close communication with your vet. They’ll be able to let you know whether running is a good form of exercise for your dachshund.

Dachshund Racing in the USA

A greyhound race is a face-paced contest of canine athletics. A dachshund race is… not quite the same. Even though this breed isn’t a natural runner, plenty of wiener dog races take place at state fairs, fundraising events, and other festivals across the US. Most of these races are just for fun – the dogs aren’t trained, just set on a short course and let loose, and many times you can enter your own dachshund or dachshund mix into the competition.

It should be noted that the Dachshund Club of America officially condemns dachshund races, as they encourage the breeding of dogs outside of AKC standards and the misuse of dogs not bred for racing. The DCA suggests training your dachshund for AKC events like Obedience and Agility instead. Although this topic is controversial in some circles, there’s a distinct difference between the exploitation of an entire breed and entering your pet in a short race for fun. As always, when considering something like a dachshund race, we encourage you to put the health and welfare of your dachshund first.

If your primary motive in adopting a dog is to gain a running companion, there are better breeds for you than a dachshund. However, this doesn’t mean that you can’t enjoy outdoor activities with a sausage dog. Indeed, dachshunds need regular exercise to stay healthy. The key is to know your dachshund’s limits and to stay within them. For example, you might consider keeping a dachshund backpack with you in case your dog gets tired. Luckily, a dachshund is a fairly portable dog.

Above all, stay in constant communication with your vet about your dachshund’s joint and back health. This will help keep your pooch at peak health for as long as possible. Any type of exercise – for dogs or humans – is potentially dangerous if you do too much of it, so let your dachshund run in moderation.

Should You Encourage Your Dachshund Jumping? Can Too Much Jumping Cause an Issue on your Dog’s Spine?
Next Post: Top 10 Best Dachshund Life Jackets of 2022