Are teacup and toy dachshunds a genuine category within the breed, or are these merely miniature dachshunds with designer names? Let’s see.

Breeders who genuinely understand, respect, and care for the dachshund breed do not refer to the dogs in the wrong context. According to the “WCF” or “World Canine Federation,” there are 83 countries that divide the breed into (3) three classes, including the standard, miniature, and the “kaninchen” also referenced as “rabbit” – not toy or teacup.

Where Do The Names “Toy” And “Teacup” Come From?

The names “toy” and “teacup” are not something genuine breeders are familiar with, nor are these terms recognized by registries worldwide. The most diminutive dachshund is referred to as a Kaninchen or rabbit class.

The American Kennel Club or AKC does not recognize even the Kaninchen class, nor do the Canadian or United Kingdom clubs. A “toy” or “teacup” dachshund was at one time listed on only one registry in the entire world, “The United Canine Association” list or UCA, but they have since removed these terms finding them to be an error.

In reality, these are quite frankly merely labels that individuals inadvertently attach to the dogs. Whether you call them “rabbit” or “toy” or “teacup,” their weight designates where they fall with breeder registries.

As far as the “World Canine Federation,” the tiniest breed of dachshund is referred to as a “rabbit” or “kaninchen” – if you want to be accurate in your terminology. Regardless, no matter what you call the tiny dogs, the smallest class will be under eight pounds in weight.

Breeding Of The Teacup Puppies?

The standard dachshund is already a small dog and is commonly used for mixing with traditional breeds to produce smaller variations. That’s due to people preferring little dogs today compared to previous years. Many are apartment dwelling, downsizing, and hoping for less responsibility like minimal food costs.

There is much controversy around breeding the dogs since achieving these tiny toy or teacup mini dachshund sizes is often at the expense of their health and well-being. Standard doxies are already afflicted with dwarfism, which can affect their spinal health.

In order for a dog to also have this trait, it needs to inherit it from both parents. If only one parent has the condition, the pups will likely be okay, but those pups’ puppies could have the gene.

Mixing a dachshund with a smaller breed of dog can result in an even smaller size doxie, but there’s no promise the resultant puppy will have the characteristics of a dachshund.

However, the controversy comes when breeders continue to use the runts of the doxie litter to repeatedly reproduce these tiny pups. These little guys are challenged to get adequate nutrients causing their immune systems to develop poorly and create more opportunities for diseases.

If you’re considering an exceptionally tiny dog, it’s essential to be reasonable about how little a pup can be and remain healthy.

How big do teacup Dachshunds get? The kaninchen or rabbit dachshund, which some people reference as a “toy” or “teacup,” is the smallest version of the miniature doxie. These pups have elongated bodies that many associates with sausages or wieners with a weight under 8 pounds and will stop growing when they reach a height of only between 5 and 7 inches.

The animal has tiny, stubby legs and the appearance of a puppy which will continue throughout its life. The eyes typically look a bit too big for their face, and the ears are large, floppy appendages framing their little face while the nose is long and pointy.

The animals’ coats and coloring will depend on how they’re bred. If breeders choose to use the runts of a dachshund litter, these doxie pups will have the typical coloring associated with dachshunds.

History Of The “Toy” or “Teacup” Dachshunds

The standard and miniature of the breed were bred to hunt badgers, rabbits, and other types of animals out of their underground habitats. The dogs needed to be a precise size and shape to get their bodies into these holes to chase these critters out and were explicitly bred to this capacity.

The label “toy” or “teacup” is relatively new and has nothing to do with the animal’s history of hunting. The reality is, typically, when a runt shows up in a litter, they are generally overlooked as an option for purchase. People wanted strong, healthy, capable dogs.

That began to change when more people started noticing (kudos to marketing by unscrupulous breeders) the tiny breeds and realizing there might be less expensive to care for with minimal space needed.

Plus, the marketing schemes showed them as being “rare,” so people found the idea of having a unique animal enticing and would pay high prices to have one.

What Is The Lifespan For The Tiniest Of The Dachshunds? 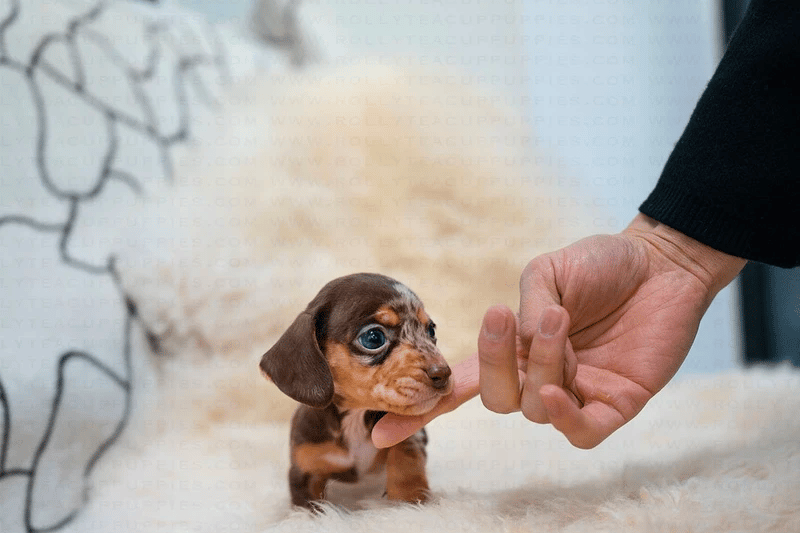 How long do teacup dachshunds live? The smallest doxies will live as long as 17 years, but this is merely a suggestion, not a guarantee. All dogs are unique with different traits, unique possibilities for health concerns, and varied lives and care received in their home environment. That makes this type of question exceptionally challenging to give an exact answer for any one dog.

If a pet parent chooses a high-quality meal plan with wholesome, natural foods, engages the animal in plenty of exercises and mental stimulation, offers love and affection, plus regular healthcare, the intention is for long, quality life.

Health Concerns For The Smallest Class of Dachshunds

Again for vigilant parents, the Kaninchen will enjoy a long and healthy lifespan. Each breed has exposure (especially if purebred) to health risks that are specific to that breed.

For dachshunds, these involve the spine, particularly IVDD or intervertebral disk disease due to their body structure. As a general rule, this class will experience the same potential health concerns as her counterparts (the standard and the miniature.)

There is testing that potential pet parents can have done on puppies to see if they’re susceptible to these conditions, plus you can get the history for the parents from the breeders before committing to a specific pup. Make sure to do your research.

The suggestion is that these little dogs have a distinctive and deafening bark compared to the other classes. That can be a good thing if you need a guard puppy.

It’s something to be aware of; however, if you’re in an apartment or require a more quiet atmosphere, this tiny guy might not be suitable for you.

The variety that you get will also play a role in the personality of your pup. A teacup long-hair dachshund is generally a bit more laid back while the wired-hair is more independent and self-assured, and the smooth-hair is friendly and affectionate.

Overall, each is a good family dog if you take the time to socialize early and avoid carrying or picking the dog up all the time. Doing so can stunt the dog’s behavior causing the animal to become aggressive, fearful, and anxious.

The smallest pup has tiny little legs making walking long distances a challenge. That doesn’t mean that you should carry the animal when going on a walk.

It merely means go on brief walks that the dog can handle without being held since gaining weight is still an issue without adequate exercise.

Most of the activity will involve playing inside the house or around the garden. Plenty of physical (and mental) stimulation is necessary because there is a ton of energy to burn even though the pup is small.

Because the animal is exceptionally tiny, you would, of course, provide food meant for small dogs. You want natural, healthful foods that your vet recommends for the breed and your dog specifically, especially if there are any health concerns to work around.

It will be challenging to select an exact meal plan due to the size of the pup. The vet will help you determine a serving size and how often you should provide a meal. Always make sure there is a dish of clean, fresh, cold water that you change regularly throughout the day.

Buying A “Toy” or “Teacup” And The Costs Involved 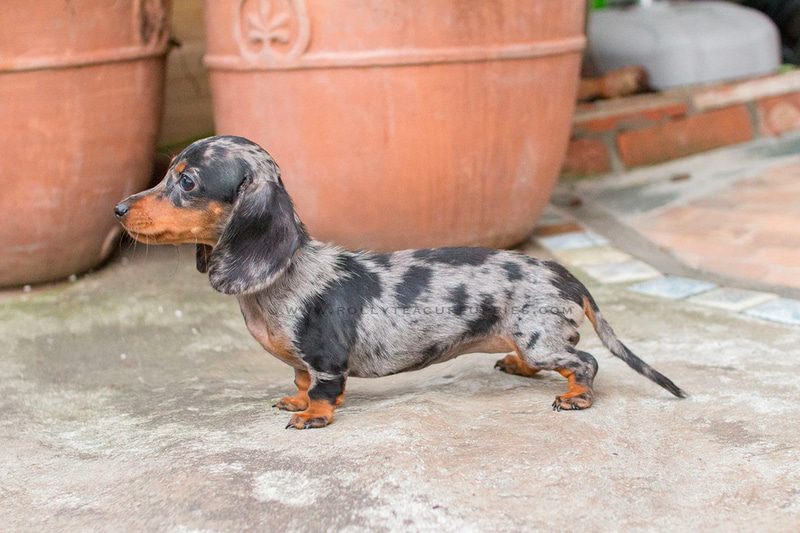 Never purchase your puppy from a farm or a market. The animal will not be healthy. You will likely get minimal, if any, information on its health or that of the parents, plus these individuals are more than likely participating in abuses and illegal trades.

It will take considerable research, but it’s essential to find a reputable breeder who is familiar with a “kaninchen” or “rabbit” class and not a “toy” or “teacup.”

A breeder of authority will not recognize those labels associated with a dachshund or will realize it only in conjunction with unscrupulous individuals in the industry.

When you find the best breeder, you will have access to the dogs and often the parents or at least the mom. Generally, you’ll be able to view the history and learn if there has been testing for the common health risks. Good breeders will be knowledgeable, experienced, and able to answer any questions you have.

The professional will not rush you when making your selection, so you can watch the litter to see how they all interact among themselves. In this way, you can get an idea of temperament.

You should not see any signs of discharge from the eyes, ears, or nose. The animal should have bright eyes, be clean, and show no signs of neglect or poor health.

A decent breeder will not overcharge for their animals, instead offering a reasonable price for the value of what they offer. It will vary from breeder to breeder.

You should not expect “cheap,” that’s a red flag or overly inflated, also a red flag. Again, this takes research to see what a relatively average charge is with reputable breeders.

The question is, how will you know if this “class” of dachshunds is suitable for you. The “kaninchen” or “rabbit’ is merely a tiny version of the doxie.

If you love a dachshund but only have limited space for an animal or live in an apartment complex or studio unit, these little guys would likely be the answer for you, especially if you have no garden.

They would at least be able to run around the house for physical activity and perhaps go to a local dog park. Also, if you’re single with no children, tiny doxie is a good fit. Small children are not a good idea around these very small little creatures.

A primary consideration if you do opt to adopt, make sure to only do so with a reputable breeder. If anyone advertises a “toy” or “teacup” or expresses a “rare dog,” their animals are probably not well. You don’t want to pay them for their practices.