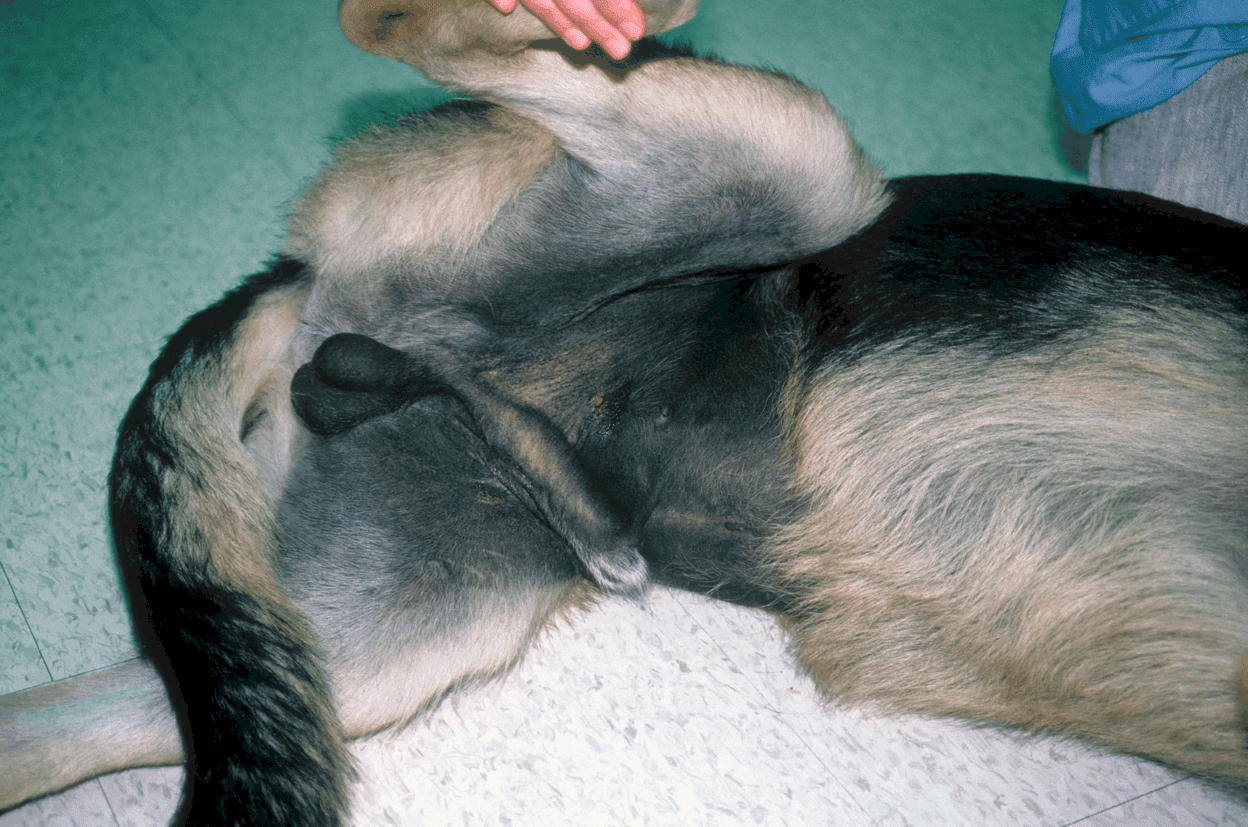 What are Acanthosis Nigricans?

While the name sounds scary, the disorder itself is actually quite bening. Acanthosis Nigricans is a hyperpigmentation disorder. While any dog breed can get this it is often seen in Dachshunds. It is usually present by 1 year of age.

How Common is it for Dachshunds to have Acanthosis Nigricans?

Primary or true Acanthosis Nigricans is most commonly seen in the Dachshund breed. That being said, it is still a rare disorder.

Secondary Acanthosis Nigricans is much more commonly seen and can affect any breed. Due to a Dachshund’s predisposition to certain underlying conditions such as hyperadrenocorticism, it isn’t surprising that they are on the list of breeds this is more often seen in.

Acanthosis Nigricans can cause the affected skin to become thickened and have either a rough or almost leathery quality. Along with thickening, the skin also becomes a darker pigment ranging from brown to black. These areas are also often hairless as well. The pigment changes are generally uniformly seen in all the affected areas.

With the secondary, or postinflammatory type, the affected areas usually don’t show up at the same time and are not uniform. They also may get worse over time. Skin infections can be commonly seen. This leads to itching, redness, discomfort and in some cases a bad odor. These qualities are not generally seen with Primary Acanthosis Nigricans.

Primary Acanthosis Nigricans is an idiopathic disorder, meaning a cause is unknown. It is thought to be genetic but that is still not confirmed.

The postinflammatory type of lichenification is not breed specific and can be caused by a number of secondary issues. One of these being obesity that causes the skin to rub together in areas such as the groin and axillary, or armpits.

Endocrine abnormalities such as hypothyroidism and hyperadrenocorticism can also cause the hair loss, thick skin and pigment changes seen with secondary Acanthosis Nigricans. Dachshunds are less prone to getting hypothyroidism but it is still possible. This endocrine disease which causes a decrease in thyroid production is more commonly seen in medium to large breed dogs. Hyperadrenocorticism, or Cushing’s Disease, however is much more common in Dachshunds. Cushing’s disease is an endocrine disorder in which there is an overproduction of cortisol.

Skin infections are not uncommon to see with secondary Acanthosis Nigricans and are usually from the changes in the skin. However, chronic skin infections can actually be a cause itself.

When to Know a Acanthosis Nigricans is Dangerous

In most cases, chronic skin infections and allergies are frustrating and uncomfortable but not truly severe. The main problem lies when these pigment changes are caused by disorders of the endocrine system. Both hypothyroidism and hyperadrenocorticism can be very dangerous if left untreated. For this reason if you are seeing a change in your dog’s skin pigment or thickness, regardless of their age and how healthy they may appear to be, it is important to consult your veterinarian.

Trying to diagnose Primary Acanthosis Nigricans can be a difficult and labor intensive process. This is because it is an idiopathic disease so it is impossible to test for it directly. In order to prove that the pigment and skin changes that are going on are due to this disorder, every other cause must be ruled out first.

Some of these are easier to rule out than others. For example, hypothyroidism requires a simple blood test. A standard thyroid panel, which is a fairly routine test, can rule this in or out as an underlying disease process.

Similarly hyperadrenocorticism can sometimes be diagnosed with a blood test. Unfortunately it isn’t as straightforward. It is common to have a few different blood tests, such as an ACTH stimulation test and a low dose dexamethasone test done. Based on these results your veterinarian may recommend an ultrasound of other diagnostics to look for a possible tumor.

If all of these come back negative or normal, your veterinarian may recommend looking at the skin itself via a skin scrape or a culture. The scrape test will check for underlying bacteria that may be secondary to a chronic skin infection. If bacteria is found, a culture can determine what exactly the bacteria is and what medications it is susceptible to in order to treat it.

If despite all these tests, there are no answers as to what the cause of the pigment changes is, then it can be diagnosed as true Acanthosis Nigricans.

Some Possible Treatments of Acanthosis Nigricans

Primary Acanthosis Nigricans has no treatment or cure. While this may be discouraging, it is strictly a cosmetic concern and doesn’t require treatment.

Treatment for secondary Acanthosis Nigricans is based on the underlying cause. Contact dermatitis will resolve itself once the dog is no longer in contact with the offending substance. Food allergies typically have other symptoms such as itchy ears and paws that go along with the changes in skin. A food change may be enough to relieve symptoms and rule this out as a cause.

Both hyperadrenocorticism and hypothyroidism are usually fairly easy to treat. As long as there are no growths or tumors that are causing the change in the endocrine system, both of these diseases can be managed by oral medication. If there are any tumors involved, surgery or radiation therapy may be an option.

There is no true recovery from Primary Acanthosis Nigricans because there is no need to treat. In regards to the postinflammatory version, few of the underlying causes have a true cure. Neither hyperadrenocorticism or hypothyroidism can be cured, but they can be managed. The same goes for allergies, both food and contact. The allergies themselves don’t go away, but the allergens can be avoided. The only causes that can be truly cured are obesity and chronic skin infections.

Is There Anything You Can Do to Help Prevent Acanthosis Nigricans?

There is nothing a pet parent can do to prevent this pigment disorder. However, keeping your Dachshund at a healthy weight and up to date on routine care can help keep some of the causes of the postinflammatory version at bay. If you notice your pup seeming to not be themselves, it is important to take them to your veterinarian. This way any endocrine, or other disorders, can be caught as early as possible and either treated or managed. A little vigilance and a whole lot of TLC can go a long way.

Acanthosis Nigricans in it’s true form is a rare disorder but one your beloved Dachshund may end up getting. Thankfully this isn’t a medically concerning disease and only results in cosmetic changes. However, the postinflammatory version is seen secondary to underlying diseases that can be more problematic. But with some vigilance as a pet parent and a little TLC your four legged friend can live a long and healthy life.