Male Dachshund every year in the U.S., millions of unwanted dogs — both mixed-breed and purebred — are put to death. The reason: supply and demand. More puppies are born than there are lifetime homes available. Some unwanted litters are produced by accident (many dog owners don’t realize their dogs can start having puppies by 5 or 6 months of age); some litters are just the result of well-intentioned but misinformed people. A common reason given by the people who fall into the latter category is that they want their children to see the miracle of life in person, by allowing their dog to have a litter of pups. But what they may not think about ahead of time is the fact that the birth of puppies is not always a beautiful experience, especially if a puppy or the bitch dies in the process. With that reasoning, parents may want to take their children to a humane society to witness the result of too many unwanted dogs. That would be a real-life lesson.

Spaying, also called “fixing” and ovariohysterectomy is the surgical removal of a female animal’s uterus and ovaries. Spaying is a routine veterinary procedure performed while the pet is anesthetized. Depending on the circumstances, the procedure may require a night of hospitalization. Most veterinarians recommend spaying around 6 months of age. Most rescue organizations will insist on spaying a female before allowing the adoption. Most humane societies will not allow a pet to leave without having been neutered. 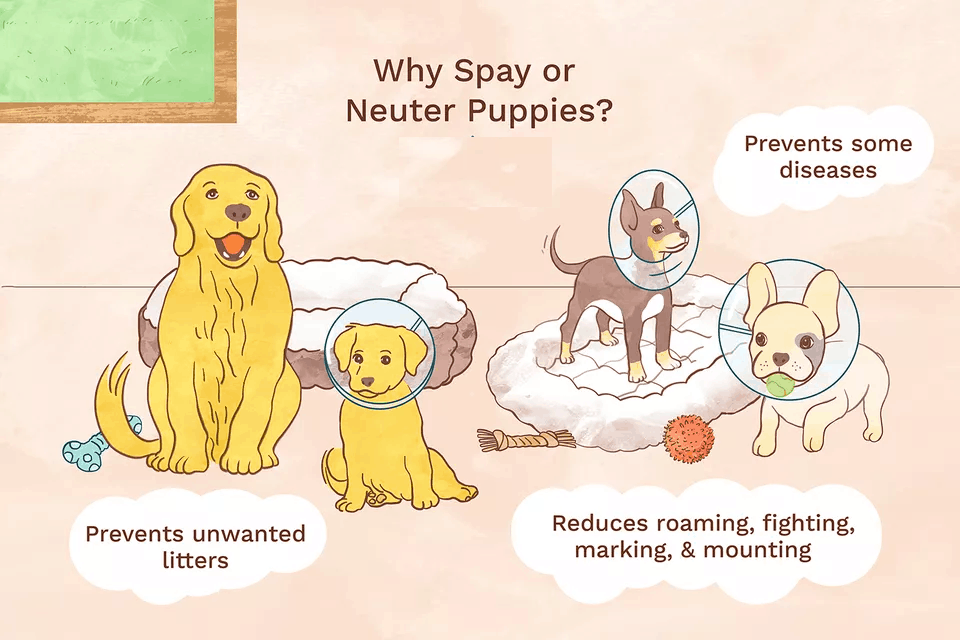 When properly timed, these simple procedures will hardly affect your pet. They can be performed quickly and safely to ensure continued good health for your pet and to prevent population growth of unwanted animals.

There are two sides to just about everything, including the subject of spaying and neutering pets. However, unless you already are, or are planning to become, a careful, conscientious, and knowledgeable breeder of purebred animals, spaying and neutering your pet is an excellent idea. There are already too many unwanted, homeless animals in the world, so why add to the problem by producing more? It’s time to put to rest some age-old myths and replace them with facts.

MYTH: “My pets will be happier and healthier if left intact.”

FACT: Actually, their happiness depends much more on you and the time you spend with them than on whether or not they are sexually intact. As for health, spayed and neutered animals run less risk of infection from breeding with unhealthy street dogs and bitches; won’t have false pregnancies; are free of the physical stress of having a litter at too young or too old age; and are not subject to testicular, uterine, or breast cancer. In addition, they will not be prone to injuries sustained from fighting.

MYTH: “My female should have at least one litter before she is spayed.”

FACT: Castrating may affect the male’s personality, but if so, in a positive way. Males often display more affection for their owners after neutering, as they turn their attention to things other than wandering and fighting with other males. A male cat’s offensive urine odors cease after neutering. Leg lifting and spraying also often cease.

MYTH: “My female’s emotional state will be harmed if she doesn’t experience the first heat cycle.”

FACT: A heat cycle has absolutely no effect on the female’s emotional health. Proper attention from you and normal maturing in the right environment work together to ensure an emotionally sound pet. Females who never have heat almost never have breast cancers!

MYTH: “I can keep my male from roaming, I can keep my in-season female away from males without putting them through all that extra surgery.”

FACT: GOOD LUCK. Males and females alike become obsessed with mating when the female is in season. They can be very determined and will persist in all sorts of ways to get together, even over and through fences. In addition, every female needs to go outdoors to relieve herself some time. It isn’t realistic to think you can protect her every moment. Established breeders build expensive, specially designed kennels for housing bitches in season in order to avoid unwanted pregnancies. Even then, accidents can happen; so don’t lull yourself into a false sense of security by thinking you can control strong animal instincts. You can’t!

MYTH: “My pet will get fat after spaying or neutering.”

FACT: Only if you let it. Proper weight control depends more on you than on the changes in your pet’s metabolism. The only source of food and proper exercise is the person providing them – YOU!

Short Haired Dachshund: All You Need to Know About The Original Wiener Dog
Next Post: The Dachshund Breed Profile – A Curious, Energetic, Mischievous, Stubborn, Yet Loveable Dog