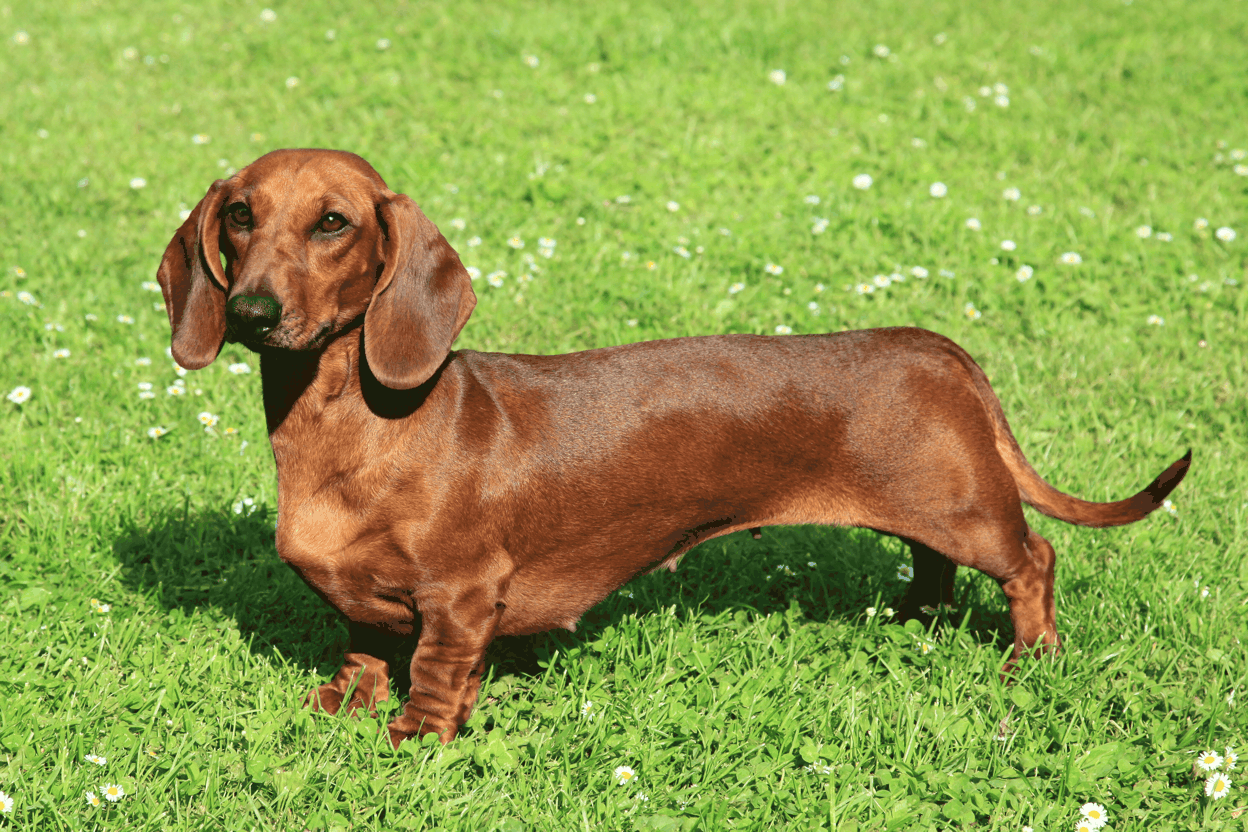 Low to ground, long in the body, and short of legs with robust muscular development, the skin is elastic and pliable without excessive wrinkling. Appearing neither crippled, awkward, nor cramped in his capacity for movement, the Dachshund is well-balanced with bold and confident head carriage and intelligent, alert facial expression. His hunting spirit, good nose, loud tongue, and distinctive build make him well-suited for below-ground work and for beating the bush. His keen nose gives him an advantage over most other breeds for trailing.

Note: Inasmuch as the Dachshund is a hunting dog, scars from honorable wounds shall not be considered a fault.

Bred and shown in two sizes, standard, and miniature, miniatures are not a separate classification but compete in a class division for “11 pounds and under at 12 months of age and older.” The weight of the standard size is usually between 16 and 32 pounds.

Viewed from above or from the side, the head tapers uniformly to the tip of the nose. The eyes are of medium size, almond-shaped, and dark-rimmed, with an energetic, pleasant expression; not piercing; very dark in color. The bridge bones over the eyes are strongly prominent. Walleyes, except in the case of dappled dogs, are a serious fault. The ears are set near the top of the head, not too far forward, of moderate length, rounded, not narrow, pointed, or folded. Their carriage, when animated, is with the forward edge just touching the cheek so that the ears frame the face. The skull is slightly arched, neither too broad nor too narrow, and slopes gradually with a little perceptible stop into the finely-formed, slightly arched muzzle. Black is the preferred color of the nose. Lips are tightly stretched, well covering the lower jaw. Nostrils are well open. Jaws opening wide and hinged well back of the eyes, with strongly developed bones and teeth.

Teeth—Powerful canine teeth; teeth fit closely together in a scissors bite. An even bite is a minor fault. Any other deviation is a serious fault.

Long, muscular, clean-cut, without dewlap, slightly arched in the nape, flowing gracefully into the shoulders.

The trunk is long and fully muscled. When viewed in profile, the back lies in the straightest possible line between the withers and the short very slightly arched loin. A body that hangs loosely between the shoulders is a serious fault.

For effective underground work, the front must be strong, deep, long, and cleanly muscled.

Chest: The breastbone is strongly prominent in front so that on either side a depression or dimple appears. When viewed from the front, the thorax appears oval and extends downward to the mid-point of the forearm. The enclosing structure of well-sprung ribs appears full and oval to allow, by its ample capacity, complete development of the heart and lungs. The keel merges gradually into the line of the abdomen and extends well beyond the front legs. Viewed in profile, the lowest point of the breast line is covered by the front leg.

Shoulder Blades: Long, broad, well-laid back and firmly placed upon the fully developed thorax, closely fitted at the withers, furnished with hard yet pliable muscles.

Upper Arm: Ideally the same length as the shoulder blade and at right angles to the latter, strong of bone and hard of muscle, lying close to the ribs, with elbows close to the body, yet capable of free movement.

Forearm: Short; supplied with hard yet pliable muscles on the front and outside, with tightly stretched tendons on the inside and at the back, slightly curved inwards. The joints between the forearms and the feet (wrists) are closer together than the shoulder joints, so that the front does not appear absolutely straight. Knuckling over is a disqualifying fault.

Feet: Front paws are full, tight, compact, with well-arched toes and tough, thick pads. They may be equally inclined a trifle outward. There are five toes, four in use, close together with a pronounced arch and strong, short nails. Front dewclaws may be removed.

Strong and cleanly muscled. The pelvis, the thigh, the second thigh, and the metatarsus are ideally the same length and form a series of right angles. From the rear, the thighs are strong and powerful. The legs turn neither in nor out.

Metatarsus: Short and strong, perpendicular to the second thigh bone. When viewed from behind, they are upright and parallel.

Feet: Hind Paws—Smaller than the front paws with four compactly closed and arched toes with tough, thick pads. The entire foot points straight ahead and is balanced equally on the ball and not merely on the toes. Rear dewclaws should be removed.

Croup: Long, rounded and full, sinking slightly toward the tail.

Tail: Set in continuation of the spine, extending without kinks, twists, or pronounced curvature, and not carried too gaily.

Fluid and smooth. Forelegs reach well forward, without much lift, in unison with the driving action of hind legs. The correct shoulder assembly and well-fitted elbows allow the long, free stride in front. Viewed from the front, the legs do not move in exact parallel planes, but incline slightly inward to compensate for shortness of leg and width of chest. Hind legs drive on a line with the forelegs, with hocks (metatarsus) turning neither in nor out. The propulsion of the hind leg depends on the dog’s ability to carry the hind leg to complete extension. Viewed in profile, the forward reach of the hind leg equals the rear extension. The thrust of correct movement is seen when the rear pads are clearly exposed during rear extension. Feet must travel parallel to the line of motion with no tendency to swing out, cross over, or interfere with each other. Short, choppy movement, rolling or high-stepping gait, close or overly wide coming or going are incorrect. The Dachshund must have agility, freedom of movement, and endurance to do the work for which he was developed.

The Dachshund is clever, lively, and courageous to the point of rashness, persevering in above and below groundwork, with all the senses well-developed. Any display of shyness is a serious fault.

The Dachshund is bred with three varieties of coat: Smooth; Wirehaired; Longhaired and is shown in two sizes, standard, and miniature. All three varieties and both sizes must conform to the characteristics already specified. The following features are applicable for each variety:

Coat: Short, smooth, and shining. Should be neither too long nor too thick. Ears not leathery.

Tail: Gradually tapered to a point, well but not too richly haired. Long sleek bristles on the underside are considered a patch of strong-growing hair, not a fault. A brush tail is a fault, as is also a partly or wholly hairless tail.

Color of Hair: Although base color is immaterial, certain patterns and basic colors predominate. One-colored Dachshunds include red (with or without a shading of interspersed dark hairs or sable) and cream. A small amount of white on the chest is acceptable, but not desirable.

Two-colored Dachshunds include black, chocolate, wild boar, gray (blue), and fawn (Isabella), each with tan markings over the eyes, on the sides of the jaw and under lip, on the inner edge of the ear, front, breast, inside and behind the front legs, on the paws and around the anus, and from there to about one-third to one-half of the length of the tail on the underside. Undue prominence or extreme lightness of tan markings is undesirable. A small amount of white on the chest is acceptable but not desirable.

Nose and nails: in the case of black dogs, black; for chocolate and all other colors, dark brown, but self-colored is acceptable.

Dappled Dachshunds: The “single” dapple pattern is expressed as lighter-colored areas contrasting with the darker base color, which may be any acceptable color. Neither the light nor the dark color should predominate. Nose and nails are the same as for one and two-colored Dachshunds. Partial or wholly blue (wall) eyes are as acceptable as dark eyes. A large area of white on the chest of a dapple is permissible.

A “double” dapple is one in which varying amounts of white coloring occur over the body in addition to the dapple pattern. Nose and nails: as for one and two-color Dachshunds; partial or wholly self-colored is permissible.

Brindle is a pattern (as opposed to a color) in which black or dark stripes occur over the entire body although in some specimens the pattern may be visible only in the tan points.

Coat: With the exception of jaw, eyebrows, and ears, the whole body is covered with a uniform tight, short, thick, rough, hard, outer coat but with finer, somewhat softer, shorter hairs (undercoat) everywhere distributed between the coarser hairs. The absence of an undercoat is a fault. The distinctive facial furnishings include a beard and eyebrows. On the ears the hair is shorter than on the body, almost smooth. The general arrangement of the hair is such that the wirehaired Dachshund, when viewed from a distance, resembles the smooth. Any sort of soft hair in the outer coat, wherever found on the body, especially on the top of the head, is a fault. The same is true of long, curly, or wavy hair, or hair that sticks out irregularly in all directions.

Tail: Robust, thickly haired, gradually tapering to a point. A flag tail is a fault.

Color of Hair: While the most common colors are wild boar, black and tan, and various shades of red, all colors are admissible. A small amount of white on the chest, although acceptable, is not desirable. Nose and nails–same as for the smooth variety.

Coat: The sleek, glistening, often slightly wavy hair is longer under the neck and on the fore chest, the underside of the body, the ears, and behind the legs. The coat gives the dog an elegant appearance. Short hair on the ear is not desirable. Too profuse a coat which masks type, equally long hair over the whole body, a curly coat, or a pronounced parting on the back is faults.

Tail: Carried gracefully in prolongation of the spine; the hair attains its greatest length here and forms a veritable flag.

Color of Hair: Same as for the smooth Dachshund.

Nose and nails:  same as for the smooth.

The foregoing description is that of the ideal Dachshund. Any deviation from the above-described dog must be penalized to the extent of the deviation keeping in mind the importance of the contribution of the various features toward the basic original purpose of the breed.